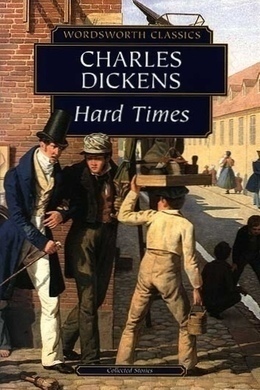 Coketown is dominated by the figure of Mr Thomas Gradgrind, school headmaster and model of Utilitarian success. Feeding both his pupils and family with facts, he bans fancy and wonder from any young minds. As a consequence, his obedient daughter Louisa marries the loveless businessman and ‘bully of humanity’ Mr Bounderby, and his son Tom rebels to become embroiled in gambling and robbery. And, as their fortunes cross with those of free-spirited circus girl Sissy Jupe and victimized weaver Stephen Blackpool, Gradgrind is eventually forced to recognize the value of the human heart in an age of materialism and machinery.

The speaker, and the schoolmaster, and the third grown person present, all backed a little, and swept with their eyes the inclined plane of little vessels then and there arranged in order, ready to have imperial gallons of facts poured into them until they were full to the brim.

In such terms Mr. Gradgrind always mentally introduced himself, whether to his private circle of acquaintance, or to the public in general. In such terms, no doubt, substituting the words ‘boys and girls,’ for ‘sir,’ Thomas Gradgrind now presented Thomas Gradgrind to the little pitchers before him, who were to be filled so full of facts.

Indeed, as he eagerly sparkled at them from the cellarage before mentioned, he seemed a kind of cannon loaded to the muzzle with facts, and prepared to blow them clean out of the regions of childhood at one discharge. He seemed a galvanizing apparatus, too, charged with a grim mechanical substitute for the tender young imaginations that were to be stormed away.

‘Girl number twenty,’ said Mr. Gradgrind, squarely pointing with his square forefinger, ‘I don’t know that girl. Who is that girl?’

‘Sissy is not a name,’ said Mr. Gradgrind. ‘Don’t call yourself Sissy. Call yourself Cecilia.’

‘It’s father as calls me Sissy, sir,’ returned the young girl in a trembling voice, and with another curtsey.

‘Then he has no business to do it,’ said Mr. Gradgrind. ‘Tell him he mustn’t. Cecilia Jupe. Let me see. What is your father?’

‘He belongs to the horse-riding, if you please, sir.’

Mr. Gradgrind frowned, and waved off the objectionable calling with his hand.

‘If you please, sir, when they can get any to break, they do break horses in the ring, sir.’

‘You mustn’t tell us about the ring, here. Very well, then. Describe your father as a horsebreaker. He doctors sick horses, I dare say?’

‘Very well, then. He is a veterinary surgeon, a farrier, and horsebreaker. Give me your definition of a horse.’

(Sissy Jupe thrown into the greatest alarm by this demand.)

‘Girl number twenty unable to define a horse!’ said Mr. Gradgrind, for the general behoof of all the little pitchers. ‘Girl number twenty possessed of no facts, in reference to one of the commonest of animals! Some boy’s definition of a horse. Bitzer, yours.’