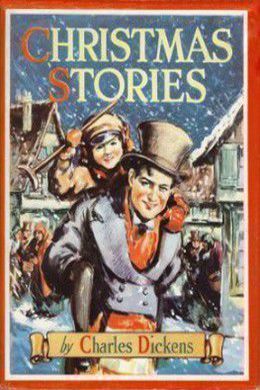 In this charming collection of short stories, Dickens presents a galaxy of beautifully drawn characters. He presents the branches of Christmas tree as ladders which one climbs in the journey from childhood to youth. Going through the book evokes the sweet memories of childhood.

I have been looking on, this evening, at a merry company of children assembled round that pretty German toy, a Christmas Tree. The tree was planted in the middle of a great round table, and towered high above their heads. It was brilliantly lighted by a multitude of little tapers; and everywhere sparkled and glittered with bright objects. There were rosy–cheeked dolls, hiding behind the green leaves; and there were real watches (with movable hands, at least, and an endless capacity of being wound up) dangling from innumerable twigs; there were French–polished tables, chairs, bedsteads, wardrobes, eight–day clocks, and various other articles of domestic furniture (wonderfully made, in tin, at Wolverhampton), perched among the boughs, as if in preparation for some fairy housekeeping; there were jolly, broad–faced little men, much more agreeable in appearance than many real men—and no wonder, for their heads took off, and showed them to be full of sugar–plums; there were fiddles and drums; there were tambourines, books, work–boxes, paint–boxes, sweetmeat–boxes, peep–show boxes, and all kinds of boxes; there were trinkets for the elder girls, far brighter than any grown–up gold and jewels; there were baskets and pincushions in all devices; there were guns, swords, and banners; there were witches standing in enchanted rings of pasteboard, to tell fortunes; there were teetotums, humming–tops, needle–cases, pen–wipers, smelling–bottles, conversation–cards, bouquet–holders; real fruit, made artificially dazzling with gold leaf; imitation apples, pears, and walnuts, crammed with surprises; in short, as a pretty child, before me, delightedly whispered to another pretty child, her bosom friend, “There was everything, and more.” This motley collection of odd objects, clustering on the tree like magic fruit, and flashing back the bright looks directed towards it from every side—some of the diamond–eyes admiring it were hardly on a level with the table, and a few were languishing in timid wonder on the bosoms of pretty mothers, aunts, and nurses—made a lively realisation of the fancies of childhood; and set me thinking how all the trees that grow and all the things that come into existence on the earth, have their wild adornments at that well–remembered time.

Being now at home again, and alone, the only person in the house awake, my thoughts are drawn back, by a fascination which I do not care to resist, to my own childhood. I begin to consider, what do we all remember best upon the branches of the Christmas Tree of our own young Christmas days, by which we climbed to real life.

Straight, in the middle of the room, cramped in the freedom of its growth by no encircling walls or soon–reached ceiling, a shadowy tree arises; and, looking up into the dreamy brightness of its top— for I observe in this tree the singular property that it appears to grow downward towards the earth—I look into my youngest Christmas recollections!

All toys at first, I find. Up yonder, among the green holly and red berries, is the Tumbler with his hands in his pockets, who wouldn’t lie down, but whenever he was put upon the floor, persisted in rolling his fat body about, until he rolled himself still, and brought those lobster eyes of his to bear upon me—when I affected to laugh very much, but in my heart of hearts was extremely doubtful of him. Close beside him is that infernal snuff–box, out of which there sprang a demoniacal Counsellor in a black gown, with an obnoxious head of hair, and a red cloth mouth, wide open, who was not to be endured on any terms, but could not be put away either; for he used suddenly, in a highly magnified state, to fly out of Mammoth Snuff–boxes in dreams, when least expected. Nor is the frog with cobbler’s wax on his tail, far off; for there was no knowing where he wouldn’t jump; and when he flew over the candle, and came upon one’s hand with that spotted back—red on a green ground—he was horrible. The cardboard lady in a blue–silk skirt, who was stood up against the candlestick to dance, and whom I see on the same branch, was milder, and was beautiful; but I can’t say as much for the larger cardboard man, who used to be hung against the wall and pulled by a string; there was a sinister expression in that nose of his; and when he got his legs round his neck (which he very often did), he was ghastly, and not a creature to be alone with.

When did that dreadful Mask first look at me? Who put it on, and why was I so frightened that the sight of it is an era in my life? It is not a hideous visage in itself; it is even meant to be droll, why then were its stolid features so intolerable? Surely not because it hid the wearer’s face.