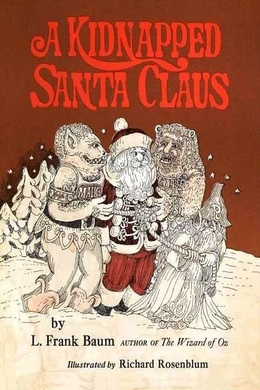 Santa Claus lives in the Laughing Valley. On one side of the Valley is the mighty Forest of Burzee, home of the fairies. At the other side stands a terrible mountain that contains the caves of the daemons: Selfishness, Envy, Hatred, and Repentance. The daemons, thinking they have great cause to dislike old Santa, enact a treacherous plan on Christmas Eve. Then, with Santa curiously absent, only Santa’s magical friends can save Christmas! A comic adaptation retelling the classic Christmas tale of adventure and danger.

Santa Claus lives in the Laughing Valley, where stands the big, rambling castle in which his toys are manufactured. His workmen, selected from the ryls, knooks, pixies and fairies, live with him, and every one is as busy as can be from one year’s end to another.

It is called the Laughing Valley because everything there is happy and gay. The brook chuckles to itself as it leaps rollicking between its green banks; the wind whistles merrily in the trees; the sunbeams dance lightly over the soft grass, and the violets and wild flowers look smilingly up from their green nests. To laugh one needs to be happy; to be happy one needs to be content. And throughout the Laughing Valley of Santa Claus contentment reigns supreme.

On one side is the mighty Forest of Burzee. At the other side stands the huge mountain that contains the Caves of the Daemons. And between them the Valley lies smiling and peaceful.

One would thing that our good old Santa Claus, who devotes his days to making children happy, would have no enemies on all the earth; and, as a matter of fact, for a long period of time he encountered nothing but love wherever he might go.

But the Daemons who live in the mountain caves grew to hate Santa Claus very much, and all for the simple reason that he made children happy.

The Caves of the Daemons are five in number. A broad pathway leads up to the first cave, which is a finely arched cavern at the foot of the mountain, the entrance being beautifully carved and decorated. In it resides the Daemon of Selfishness. Back of this is another cavern inhabited by the Daemon of Envy. The cave of the Daemon of Hatred is next in order, and through this one passes to the home of the Daemon of Malice–situated in a dark and fearful cave in the very heart of the mountain. I do not know what lies beyond this. Some say there are terrible pitfalls leading to death and destruction, and this may very well be true. However, from each one of the four caves mentioned there is a small, narrow tunnel leading to the fifth cave–a cozy little room occupied by the Daemon of Repentance. And as the rocky floors of these passages are well worn by the track of passing feet, I judge that many wanderers in the Caves of the Daemons have escaped through the tunnels to the abode of the Daemon of Repentance, who is said to be a pleasant sort of fellow who gladly opens for one a little door admitting you into fresh air and sunshine again.

Well, these Daemons of the Caves, thinking they had great cause to dislike old Santa Claus, held a meeting one day to discuss the matter.

“I’m really getting lonesome,” said the Daemon of Selfishness. “For Santa Claus distributes so many pretty Christmas gifts to all the children that they become happy and generous, through his example, and keep away from my cave.”

“I’m having the same trouble,” rejoined the Daemon of Envy. “The little ones seem quite content with Santa Claus, and there are few, indeed, that I can coax to become envious.”

“And that makes it bad for me!” declared the Daemon of Hatred. “For if no children pass through the Caves of Selfishness and Envy, none can get to MY cavern.”

“Or to mine,” added the Daemon of Malice.

“For my part,” said the Daemon of Repentance, “it is easily seen that if children do not visit your caves they have no need to visit mine; so that I am quite as neglected as you are.”

“And all because of this person they call Santa Claus!” exclaimed the Daemon of Envy. “He is simply ruining our business, and something must be done at once.”

To this they readily agreed; but what to do was another and more difficult matter to settle. They knew that Santa Claus worked all through the year at his castle in the Laughing Valley, preparing the gifts he was to distribute on Christmas Eve; and at first they resolved to try to tempt him into their caves, that they might lead him on to the terrible pitfalls that ended in destruction.

So the very next day, while Santa Claus was busily at work, surrounded by his little band of assistants, the Daemon of Selfishness came to him and said:

“These toys are wonderfully bright and pretty. Why do you not keep them for yourself? It’s a pity to give them to those noisy boys and fretful girls, who break and destroy them so quickly.”

“Nonsense!” cried the old graybeard, his bright eyes twinkling merrily as he turned toward the tempting Daemon. “The boys and girls are never so noisy and fretful after receiving my presents, and if I can make them happy for one day in the year I am quite content.”

So the Daemon went back to the others, who awaited him in their caves, and said:

“I have failed, for Santa Claus is not at all selfish.”