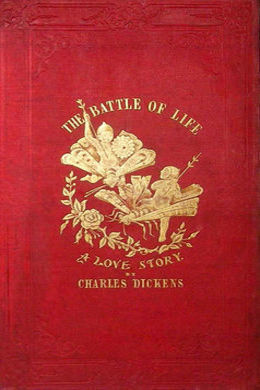 The Battle of Life

A Christmas love story and the only one of Dickens’ Christmas stories without a supernatural theme, is about a group of philosophical friends who meet over breakfast in the woods to discuss the serious questions of life while the four daughters of one of them sing dance naturally. It’s a book about the virtues of a regular, decent, simple life not stifled by the harshness of ideas. An entertaining and cheerfully uplifting love story, perfect reading for the holiday season.

Once upon a time, it matters little when, and in stalwart England, it matters little where, a fierce battle was fought. It was fought upon a long summer day when the waving grass was green. Many a wild flower formed by the Almighty Hand to be a perfumed goblet for the dew, felt its enamelled cup fill high with blood that day, and shrinking dropped. Many an insect deriving its delicate color from harmless leaves and herbs, was stained anew that day by dying men, and marked its frightened way with an unnatural track. The painted butterfly took blood into the air upon the edges of its wings. The stream ran red. The trodden ground became a quagmire, whence, from sullen pools collected in the prints of human feet and horses’ hoofs, the one prevailing hue still lowered and glimmered at the sun.

Heaven keep us from a knowledge of the sights the moon beheld upon that field, when, coming up above the black line of distant rising–ground, softened and blurred at the edge by trees, she rose into the sky and looked upon the plain, strewn with upturned faces that had once at mothers’ breasts sought mothers’ eyes, or slumbered happily. Heaven keep us from a knowledge of the secrets whispered afterwards upon the tainted wind that blew across the scene of that day’s work and that night’s death and suffering! Many a lonely moon was bright upon the battle–ground, and many a star kept mournful watch upon it, and many a wind from every quarter of the earth blew over it, before the traces of the fight were worn away.

They lurked and lingered for a long time, but survived in little things, for Nature, far above the evil passions of men, soon recovered Her serenity, and smiled upon the guilty battle–ground as she had done before, when it was innocent. The larks sang high above it, the swallows skimmed and dipped and flitted to and fro, the shadows of the flying clouds pursued each other swiftly, over grass and corn and turnip–field and wood, and over roof and church–spire in the nestling town among the trees, away into the bright distance on the borders of the sky and earth, where the red sunsets faded. Crops were sown, and grew up, and were gathered in; the stream that had been crimsoned, turned a watermill; men whistled at the plough; gleaners and haymakers were seen in quiet groups at work; sheep and oxen pastured; boys whooped and called, in fields, to scare away the birds; smoke rose from cottage chimneys; sabbath bells rang peacefully; old people lived and died; the timid creatures of the field, and simple flowers of the bush and garden, grew and withered in their destined terms: and all upon the fierce and bloody battle–ground, where thousands upon thousands had been killed in the great fight.

But there were deep green patches in the growing corn at first, that people looked at awfully. Year after year they re–appeared; and it was known that underneath those fertile spots, heaps of men and horses lay buried, indiscriminately, enriching the ground. The husbandmen who ploughed those places, shrunk from the great worms abounding there; and the sheaves they yielded, were, for many a long year, called the Battle Sheaves, and set apart; and no one ever knew a Battle Sheaf to be among the last load at a Harvest Home. For a long time, every furrow that was turned, revealed some fragments of the fight. For a long time, there were wounded trees upon the battle–ground; and scraps of hacked and broken fence and wall, where deadly struggles had been made; and trampled parts where not a leaf or blade would grow. For a long time, no village–girl would dress her hair or bosom with the sweetest flower from that field of death: and after many a year had come and gone, the berries growing there, were still believed to leave too deep a stain upon the hand that plucked them.

The Seasons in their course, however, though they passed as lightly as the summer clouds themselves, obliterated, in the lapse of time, even these remains of the old conflict; and wore away such legendary traces of it as the neighbouring people carried in their minds, until they dwindled into old wives’ tales, dimly remembered round the winter fire, and waning every year. Where the wild flowers and berries had so long remained upon the stem untouched, gardens arose, and houses were built, and children played at battles on the turf. The wounded trees had long ago made Christmas logs, and blazed and roared away. The deep green patches were no greener now than the memory of those who lay in dust below. The ploughshare still turned up from time to time some rusty bits of metal, but it was hard to say what use they had ever served, and those who found them wondered and disputed.