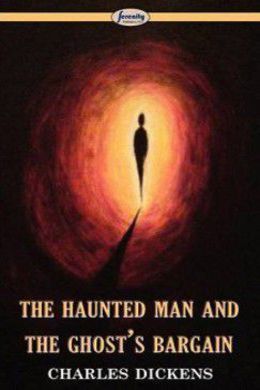 The Haunted Man and the Ghost's Bargain

Redlaw is a teacher of chemistry who often broods over wrongs done him and grief from his past. He is haunted by a spirit, who is not so much a ghost as Redlaw’s phantom twin and is “an awful likeness of himself…with his features, and his bright eyes, and his grizzled hair, and dressed in the gloomy shadow of his dress…” This specter appears and proposes to Redlaw that he can allow him to “forget the sorrow, wrong, and trouble you have known…to cancel their remembrance…” Redlaw is hesitant at first, but finally agrees. However, before the spirit vanishes it imposes an additional consequence: “The gift that I have given you, you shall give again, go where you will.” (Source: Wikipedia)

Far be it from me to assert that what everybody says must be true. Everybody is, often, as likely to be wrong as right. In the general experience, everybody has been wrong so often, and it has taken, in most instances, such a weary while to find out how wrong, that the authority is proved to be fallible. Everybody may sometimes be right; “but that’s no rule,” as the ghost of Giles Scroggins says in the ballad.

The dread word, GHOST, recalls me.

Everybody said he looked like a haunted man. The extent of my present claim for everybody is, that they were so far right. He did.

Who could have seen his hollow cheek; his sunken brilliant eye; his black–attired figure, indefinably grim, although well–knit and well–proportioned; his grizzled hair hanging, like tangled sea–weed, about his face,—as if he had been, through his whole life, a lonely mark for the chafing and beating of the great deep of humanity,—but might have said he looked like a haunted man?

Who could have observed his manner, taciturn, thoughtful, gloomy, shadowed by habitual reserve, retiring always and jocund never, with a distraught air of reverting to a bygone place and time, or of listening to some old echoes in his mind, but might have said it was the manner of a haunted man?

Who could have heard his voice, slow–speaking, deep, and grave, with a natural fulness and melody in it which he seemed to set himself against and stop, but might have said it was the voice of a haunted man?

Who that had seen him in his inner chamber, part library and part laboratory,—for he was, as the world knew, far and wide, a learned man in chemistry, and a teacher on whose lips and hands a crowd of aspiring ears and eyes hung daily,—who that had seen him there, upon a winter night, alone, surrounded by his drugs and instruments and books; the shadow of his shaded lamp a monstrous beetle on the wall, motionless among a crowd of spectral shapes raised there by the flickering of the fire upon the quaint objects around him; some of these phantoms (the reflection of glass vessels that held liquids), trembling at heart like things that knew his power to uncombine them, and to give back their component parts to fire and vapour;—who that had seen him then, his work done, and he pondering in his chair before the rusted grate and red flame, moving his thin mouth as if in speech, but silent as the dead, would not have said that the man seemed haunted and the chamber too?

Who might not, by a very easy flight of fancy, have believed that everything about him took this haunted tone, and that he lived on haunted ground?

His dwelling was so solitary and vault–like,—an old, retired part of an ancient endowment for students, once a brave edifice, planted in an open place, but now the obsolete whim of forgotten architects; smoke–age–and–weather–darkened, squeezed on every side by the overgrowing of the great city, and choked, like an old well, with stones and bricks; its small quadrangles, lying down in very pits formed by the streets and buildings, which, in course of time, had been constructed above its heavy chimney stalks; its old trees, insulted by the neighbouring smoke, which deigned to droop so low when it was very feeble and the weather very moody; its grass–plots, struggling with the mildewed earth to be grass, or to win any show of compromise; its silent pavements, unaccustomed to the tread of feet, and even to the observation of eyes, except when a stray face looked down from the upper world, wondering what nook it was; its sun–dial in a little bricked–up corner, where no sun had straggled for a hundred years, but where, in compensation for the sun’s neglect, the snow would lie for weeks when it lay nowhere else, and the black east wind would spin like a huge humming–top, when in all other places it was silent and still.

His dwelling, at its heart and core—within doors—at his fireside—was so lowering and old, so crazy, yet so strong, with its worn–eaten beams of wood in the ceiling, and its sturdy floor shelving downward to the great oak chimney–piece; so environed and hemmed in by the pressure of the town yet so remote in fashion, age, and custom; so quiet, yet so thundering with echoes when a distant voice was raised or a door was shut,—echoes, not confined to the many low passages and empty rooms, but rumbling and grumbling till they were stifled in the heavy air of the forgotten Crypt where the Norman arches were half–buried in the earth.

You should have seen him in his dwelling about twilight, in the dead winter time.

When the wind was blowing, shrill and shrewd, with the going down of the blurred sun. When it was just so dark, as that the forms of things were indistinct and big—but not wholly lost.