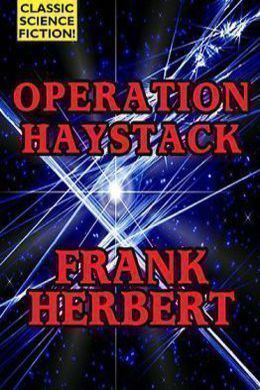 It’s hard to ferret out a gang of fanatics; it would, obviously, be even harder to spot a genetic line of dedicated men. But the problem Orne had was one step tougher than that! Field Agent Lewis Orne must contend with genetic manipulation and dig deep into a complex political situation to untangle deep embedded secrets. A science fiction classic from Frank Herbert, author of DUNE!

When the Investigation & Adjustment scout cruiser landed on Marak it carried a man the doctors had no hope of saving. He was alive only because he was in a womblike creche pod that had taken over most of his vital functions.

The man’s name was Lewis Orne. He had been a blocky, heavy-muscled redhead with slightly off-center features and the hard flesh of a heavy planet native. Even in the placid repose of near death there was something clownish about his appearance. His burned, ungent-covered face looked made up for some bizarre show.

Marak is the League capital, and the I-A medical center there is probably the best in the galaxy, but it accepted the creche pod and Orne more as a curiosity than anything else. The man had lost one eye, three fingers of his left hand and part of his hair, suffered a broken jaw and various internal injuries. He had been in terminal shock for more than ninety hours.

Umbo Stetson, Orne’s section chief, went back into his cruiser’s “office” after a hospital flitter took pod and patient. There was an added droop to Stetson’s shoulders that accentuated his usual slouching stance. His overlarge features were drawn into ridges of sorrow. A general straggling, trampish look about him was not helped by patched blue fatigues.

The doctor’s words still rang in Stetson’s ears: “This patient’s vital tone is too low to permit operative replacement of damaged organs. He’ll live for a while because of the pod, but–” And the doctor had shrugged.

Stetson slumped into his desk chair, looked out the open port beside him. Some four hundred meters below, the scurrying beetlelike activity of the I-A’s main field sent up discordant roaring and clattering. Two rows of other scout cruisers were parked in line with Stetson’s port–gleaming red and black needles. He stared at them without really seeing them.

It always happens on some “routine” assignment, he thought. Nothing but a slight suspicion about Heleb: the fact that only women held high office. One simple, unexplained fact … and I lose my best agent!

He sighed, turned to his desk, began composing the report:

“The militant core on the Planet Heleb has been eliminated. Occupation force on the ground. No further danger to Galactic peace expected from this source. Reason for operation: Rediscovery & Re-education–after two years on the planet–failed to detect signs of militancy. The major indications were: 1) a ruling caste restricted to women, and 2) disparity between numbers of males and females far beyond the Lutig norm! Senior Field Agent Lewis Orne found that the ruling caste was controlling the sex of offspring at conception (see attached details), and had raised a male slave army to maintain its rule. The R&R agent had been drained of information, then killed. Arms constructed on the basis of that information caused critical injuries to Senior Field Agent Orne. He is not expected to live. I am hereby urging that he receive the Galaxy Medal, and that his name be added to the Roll of Honor.”

Stetson pushed the page aside. That was enough for ComGO, who never read anything but the first page anyway. Details were for his aides to chew and digest. They could wait. Stetson punched his desk callbox for Orne’s service record, set himself to the task he most detested: notifying next of kin. He read, pursing his lips:

He leafed through the pages, reluctant to send the hated message. Orne had enlisted in the Marak Marines at age seventeen–a runaway from home–and his mother had given post-enlistment consent. Two years later: scholarship transfer to Uni-Galacta, the R&R school here on Marak. Five years of school and one R&R field assignment under his belt, and he had been drafted into the I-A for brilliant detection of militancy on Hammel. And two years later–kaput!

Abruptly, Stetson hurled the service record at the gray metal wall across from him; then he got up, brought the record back to his desk, smoothing the pages. There were tears in his eyes. He flipped a switch on his desk, dictated the notification to Central Secretarial, ordered it sent out priority. Then he went groundside and got drunk on Hochar Brandy, Orne’s favorite drink.