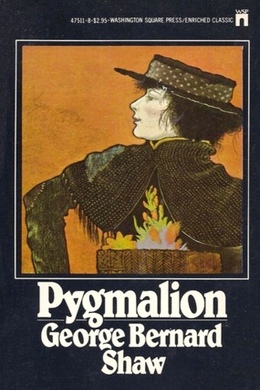 This play is based on the Greek myth of Pygmalion. It tells the story of Henry Higgins, a professor of phonetics (based on phonetician Henry Sweet), who makes a bet with his friend Colonel Pickering that he can successfully pass off a Cockney flower girl, Eliza Doolittle, as a refined society lady by teaching her how to speak with an upper class accent and training her in etiquette. In the process, Higgins and Doolittle grow close, but she ultimately rejects his domineering ways and declares she will marry Freddy Eynsford-Hill - a young, poor, gentleman. Adapted for film under the title of ‘My Fair Lady’.

Covent Garden at 11.15 p.m. Torrents of heavy summer rain. Cab whistles blowing frantically in all directions. Pedestrians running for shelter into the market and under the portico of St. Paul’s Church, where there are already several people, among them a lady and her daughter in evening dress. They are all peering out gloomily at the rain, except one man with his back turned to the rest, who seems wholly preoccupied with a notebook in which he is writing busily.

THE DAUGHTER [in the space between the central pillars, close to the one on her left] I’m getting chilled to the bone. What can Freddy be doing all this time? He’s been gone twenty minutes.

THE MOTHER [on her daughter’s right] Not so long. But he ought to have got us a cab by this.

A BYSTANDER [on the lady’s right] He won’t get no cab not until half-past eleven, missus, when they come back after dropping their theatre fares.

THE MOTHER. But we must have a cab. We can’t stand here until half-past eleven. It’s too bad.

THE BYSTANDER. Well, it ain’t my fault, missus.

THE DAUGHTER. If Freddy had a bit of gumption, he would have got one at the theatre door.

THE MOTHER. What could he have done, poor boy?

THE DAUGHTER. Other people got cabs. Why couldn’t he?

Freddy rushes in out of the rain from the Southampton Street side, and comes between them closing a dripping umbrella. He is a young man of twenty, in evening dress, very wet around the ankles.

THE DAUGHTER. Well, haven’t you got a cab?

FREDDY. There’s not one to be had for love or money.

THE MOTHER. Oh, Freddy, there must be one. You can’t have tried.

THE DAUGHTER. It’s too tiresome. Do you expect us to go and get one ourselves?

FREDDY. I tell you they’re all engaged. The rain was so sudden: nobody was prepared; and everybody had to take a cab. I’ve been to Charing Cross one way and nearly to Ludgate Circus the other; and they were all engaged.

THE MOTHER. Did you try Trafalgar Square?

FREDDY. There wasn’t one at Trafalgar Square.

THE DAUGHTER. Did you try?

FREDDY. I tried as far as Charing Cross Station. Did you expect me to walk to Hammersmith?

THE DAUGHTER. You haven’t tried at all.

THE MOTHER. You really are very helpless, Freddy. Go again; and don’t come back until you have found a cab.

FREDDY. I shall simply get soaked for nothing.

THE DAUGHTER. And what about us? Are we to stay here all night in this draught, with next to nothing on. You selfish pig–

FREDDY. Oh, very well: I’ll go, I’ll go. [He opens his umbrella and dashes off Strandwards, but comes into collision with a flower girl, who is hurrying in for shelter, knocking her basket out of her hands. A blinding flash of lightning, followed instantly by a rattling peal of thunder, orchestrates the incident]

FREDDY. Sorry [he rushes off].

THE FLOWER GIRL [picking up her scattered flowers and replacing them in the basket] There’s menners f’ yer! Te-oo banches o voylets trod into the mad. [She sits down on the plinth of the column, sorting her flowers, on the lady’s right. She is not at all an attractive person. She is perhaps eighteen, perhaps twenty, hardly older. She wears a little sailor hat of black straw that has long been exposed to the dust and soot of London and has seldom if ever been brushed. Her hair needs washing rather badly: its mousy color can hardly be natural. She wears a shoddy black coat that reaches nearly to her knees and is shaped to her waist. She has a brown skirt with a coarse apron. Her boots are much the worse for wear. She is no doubt as clean as she can afford to be; but compared to the ladies she is very dirty. Her features are no worse than theirs; but their condition leaves something to be desired; and she needs the services of a dentist].

THE MOTHER. How do you know that my son’s name is Freddy, pray?

THE FLOWER GIRL. Ow, eez ye-ooa san, is e? Wal, fewd dan y’ de-ooty bawmz a mather should, eed now bettern to spawl a pore gel’s flahrzn than ran awy atbaht pyin. Will ye-oo py me f’them? [Here, with apologies, this desperate attempt to represent her dialect without a phonetic alphabet must be abandoned as unintelligible outside London.]

THE DAUGHTER. Do nothing of the sort, mother. The idea!

THE MOTHER. Please allow me, Clara. Have you any pennies?

THE DAUGHTER. No. I’ve nothing smaller than sixpence.

THE FLOWER GIRL [hopefully] I can give you change for a tanner, kind lady.

THE MOTHER [to Clara] Give it to me. [Clara parts reluctantly]. Now [to the girl] This is for your flowers.

THE DAUGHTER. Make her give you the change. These things are only a penny a bunch.