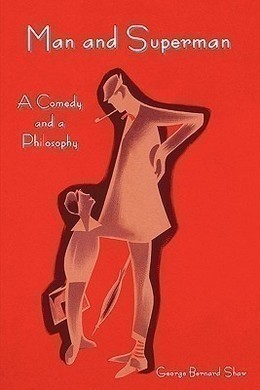 A Comedy and a Philosophy

After the death of her father, Ann Whitefield becomes the joint ward of two men: the respectable Roebuck Ramsden and John Tanner, author of ‘The Revolutionist’s Handbook’. Believing marriage would prevent him from achieving his higher intellectual and political ambitions, Tanner is horrified to discover that Ann intends to marry him, and flees to Spain with the determined young woman in hot pursuit. The chase even leads them to the underworld, where the characters’ alter egos discuss questions of human nature and philosophy in a lively debate in a scene often performed separately as ‘Don Juan in Hell’. In Man and Superman, Shaw combined seriousness with comedy to create a satirical and buoyant exposé of the eternal struggle between the sexes.

Roebuck Ramsden is in his study, opening the morning letters. The study, handsomely and solidly furnished, proclaims the man of means. Not a speck of dust is visible: it is clear that there are at least two housemaids and a parlormaid downstairs, and a housekeeper upstairs who does not let them spare elbow-grease. Even the top of Roebuck’s head is polished: on a sunshiny day he could heliograph his orders to distant camps by merely nodding. In no other respect, however, does he suggest the military man. It is in active civil life that men get his broad air of importance, his dignified expectation of deference, his determinate mouth disarmed and refined since the hour of his success by the withdrawal of opposition and the concession of comfort and precedence and power. He is more than a highly respectable man: he is marked out as a president of highly respectable men, a chairman among directors, an alderman among councillors, a mayor among aldermen. Four tufts of iron-grey hair, which will soon be as white as isinglass, and are in other respects not at all unlike it, grow in two symmetrical pairs above his ears and at the angles of his spreading jaws. He wears a black frock coat, a white waistcoat (it is bright spring weather), and trousers, neither black nor perceptibly blue, of one of those indefinitely mixed hues which the modern clothier has produced to harmonize with the religions of respectable men. He has not been out of doors yet to-day; so he still wears his slippers, his boots being ready for him on the hearthrug. Surmising that he has no valet, and seeing that he has no secretary with a shorthand notebook and a typewriter, one meditates on how little our great burgess domesticity has been disturbed by new fashions and methods, or by the enterprise of the railway and hotel companies which sell you a Saturday to Monday of life at Folkestone as a real gentleman for two guineas, first class fares both ways included.

How old is Roebuck? The question is important on the threshold of a drama of ideas; for under such circumstances everything depends on whether his adolescence belonged to the sixties or to the eighties. He was born, as a matter of fact, in 1839, and was a Unitarian and Free Trader from his boyhood, and an Evolutionist from the publication of the Origin of Species. Consequently he has always classed himself as an advanced thinker and fearlessly outspoken reformer.

Sitting at his writing table, he has on his right the windows giving on Portland Place. Through these, as through a proscenium, the curious spectator may contemplate his profile as well as the blinds will permit. On his left is the inner wall, with a stately bookcase, and the door not quite in the middle, but somewhat further from him. Against the wall opposite him are two busts on pillars: one, to his left, of John Bright; the other, to his right, of Mr Herbert Spencer. Between them hang an engraved portrait of Richard Cobden; enlarged photographs of Martineau, Huxley, and George Eliot; autotypes of allegories by Mr G.F. Watts (for Roebuck believed in the fine arts with all the earnestness of a man who does not understand them), and an impression of Dupont’s engraving of Delaroche’s Beaux Artes hemicycle, representing the great men of all ages. On the wall behind him, above the mantelshelf, is a family portrait of impenetrable obscurity.

A chair stands near the writing table for the convenience of business visitors. Two other chairs are against the wall between the busts.

A parlormaid enters with a visitor’s card. Roebuck takes it, and nods, pleased. Evidently a welcome caller.