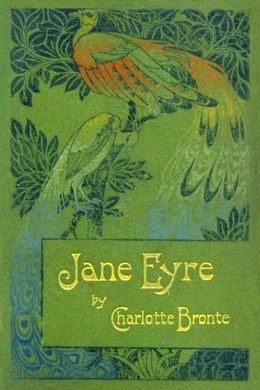 Romantic melodrama or feminist classic, Jane Eyre is one of the most enduringly popular and compelling novels in the literary canon. Overlooked or dismissed by critics in the nineteenth and early twentieth centuries, it first began to attract serious critical attention in the 1970s as New Critical, formalist and feminist critics began to re-evaluate Charlotte Bronte’s achievement.

There was no possibility of taking a walk that day. We had been wandering, indeed, in the leafless shrubbery an hour in the morning; but since dinner (Mrs. Reed, when there was no company, dined early) the cold winter wind had brought with it clouds so sombre, and a rain so penetrating, that further out-door exercise was now out of the question.

I was glad of it: I never liked long walks, especially on chilly afternoons: dreadful to me was the coming home in the raw twilight, with nipped fingers and toes, and a heart saddened by the chidings of Bessie, the nurse, and humbled by the consciousness of my physical inferiority to Eliza, John, and Georgiana Reed.

The said Eliza, John, and Georgiana were now clustered round their mama in the drawing-room: she lay reclined on a sofa by the fireside, and with her darlings about her (for the time neither quarrelling nor crying) looked perfectly happy. Me, she had dispensed from joining the group; saying, “She regretted to be under the necessity of keeping me at a distance; but that until she heard from Bessie, and could discover by her own observation, that I was endeavouring in good earnest to acquire a more sociable and childlike disposition, a more attractive and sprightly manner–something lighter, franker, more natural, as it were–she really must exclude me from privileges intended only for contented, happy, little children.”

“What does Bessie say I have done?” I asked.

“Jane, I don’t like cavillers or questioners; besides, there is something truly forbidding in a child taking up her elders in that manner. Be seated somewhere; and until you can speak pleasantly, remain silent.”

A breakfast-room adjoined the drawing-room, I slipped in there. It contained a bookcase: I soon possessed myself of a volume, taking care that it should be one stored with pictures. I mounted into the window- seat: gathering up my feet, I sat cross-legged, like a Turk; and, having drawn the red moreen curtain nearly close, I was shrined in double retirement.

Folds of scarlet drapery shut in my view to the right hand; to the left were the clear panes of glass, protecting, but not separating me from the drear November day. At intervals, while turning over the leaves of my book, I studied the aspect of that winter afternoon. Afar, it offered a pale blank of mist and cloud; near a scene of wet lawn and storm-beat shrub, with ceaseless rain sweeping away wildly before a long and lamentable blast.

I returned to my book–Bewick’s History of British Birds: the letterpress thereof I cared little for, generally speaking; and yet there were certain introductory pages that, child as I was, I could not pass quite as a blank. They were those which treat of the haunts of sea-fowl; of “the solitary rocks and promontories” by them only inhabited; of the coast of Norway, studded with isles from its southern extremity, the Lindeness, or Naze, to the North Cape–

“Where the Northern Ocean, in vast whirls, Boils round the naked, melancholy isles Of farthest Thule; and the Atlantic surge Pours in among the stormy Hebrides.”

Nor could I pass unnoticed the suggestion of the bleak shores of Lapland, Siberia, Spitzbergen, Nova Zembla, Iceland, Greenland, with “the vast sweep of the Arctic Zone, and those forlorn regions of dreary space,–that reservoir of frost and snow, where firm fields of ice, the accumulation of centuries of winters, glazed in Alpine heights above heights, surround the pole, and concentre the multiplied rigours of extreme cold.” Of these death-white realms I formed an idea of my own: shadowy, like all the half-comprehended notions that float dim through children’s brains, but strangely impressive. The words in these introductory pages connected themselves with the succeeding vignettes, and gave significance to the rock standing up alone in a sea of billow and spray; to the broken boat stranded on a desolate coast; to the cold and ghastly moon glancing through bars of cloud at a wreck just sinking.

I cannot tell what sentiment haunted the quite solitary churchyard, with its inscribed headstone; its gate, its two trees, its low horizon, girdled by a broken wall, and its newly-risen crescent, attesting the hour of eventide.

The two ships becalmed on a torpid sea, I believed to be marine phantoms.

The fiend pinning down the thief’s pack behind him, I passed over quickly: it was an object of terror.

So was the black horned thing seated aloof on a rock, surveying a distant crowd surrounding a gallows.