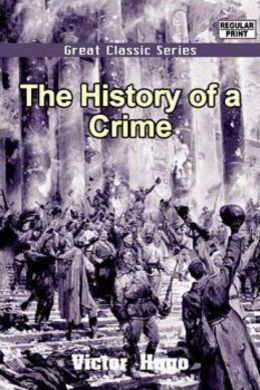 History of a Crime

The Testimony of an Eye-Witness

Published in 1877, long after it was written, it is an account of the 1852 coup d’état that brought Napoleon into power and forced Hugo into an exile of eighteen years. The work covers those momentous early days of Napoleon rule that changed the course of French history. The deepest feelings and patriotic emotions of the author are reflected in these pages that chronicle the rise of Napoleon.

On December 1, 1851, Charras shrugged his shoulder and unloaded his pistols. In truth, the belief in the possibility of a coup d’état had become humiliating. The supposition of such illegal violence on the part of M. Louis Bonaparte vanished upon serious consideration. The great question of the day was manifestly the Devincq election; it was clear that the Government was only thinking of that matter. As to a conspiracy against the Republic and against the People, how could any one premeditate such a plot? Where was the man capable of entertaining such a dream? For a tragedy there must be an actor, and here assuredly the actor was wanting. To outrage Right, to suppress the Assembly, to abolish the Constitution, to strangle the Republic, to overthrow the Nation, to sully the Flag, to dishonor the Army, to suborn the Clergy and the Magistracy, to succeed, to triumph, to govern, to administer, to exile, to banish, to transport, to ruin, to assassinate, to reign, with such complicities that the law at last resembles a foul bed of corruption. What! All these enormities were to be committed! And by whom? By a Colossus? No, by a dwarf. People laughed at the notion. They no longer said “What a crime!” but “What a farce!” For after all they reflected; heinous crimes require stature. Certain crimes are too lofty for certain hands. A man who would achieve an 18th Brumaire must have Arcola in his past and Austerlitz in his future. The art of becoming a great scoundrel is not accorded to the first comer. People said to themselves, Who is this son of Hortense? He has Strasbourg behind him instead of Arcola, and Boulogne in place of Austerlitz. He is a Frenchman, born a Dutchman, and naturalized a Swiss; he is a Bonaparte crossed with a Verhuell; he is only celebrated for the ludicrousness of his imperial attitude, and he who would pluck a feather from his eagle would risk finding a goose’s quill in his hand. This Bonaparte does not pass currency in the array, he is a counterfeit image less of gold than of lead, and assuredly French soldiers will not give us the change for this false Napoleon in rebellion, in atrocities, in massacres, in outrages, in treason. If he should attempt roguery it would miscarry. Not a regiment would stir. Besides, why should he make such an attempt? Doubtless he has his suspicious side, but why suppose him an absolute villain? Such extreme outrages are beyond him; he is incapable of them physically, why judge him capable of them morally? Has he not pledged honor? Has he not said, “No one in Europe doubts my word?” Let us fear nothing. To this could be answered, Crimes are committed either on a grand or on a mean scale. In the first category there is Caesar; in the second there is Mandrin. Caesar passes the Rubicon, Mandrin bestrides the gutter. But wise men interposed, “Are we not prejudiced by offensive conjectures? This man has been exiled and unfortunate. Exile enlightens, misfortune corrects.”

For his part Louis Bonaparte protested energetically. Facts abounded in his favor. Why should he not act in good faith? He had made remarkable promises. Towards the end of October, 1848, then a candidate for the Presidency, he was calling at No. 37, Rue de la Tour d’Auvergne, on a certain personage, to whom he remarked, “I wish to have an explanation with you. They slander me. Do I give you the impression of a madman? They think that I wish to revivify Napoleon. There are two men whom a great ambition can take for its models, Napoleon and Washington. The one is a man of Genius, the other is a man of Virtue. It is ridiculous to say, ‘I will be a man of Genius;’ it is honest to say, ‘I will be a man of Virtue.’ Which of these depends upon ourselves? Which can we accomplish by our will? To be Genius? No. To be Probity? Yes. The attainment of Genius is not possible; the attainment of Probity is a possibility. And what could I revive of Napoleon? One sole thing–a crime. Truly a worthy ambition! Why should I be considered man? The Republic being established, I am not a great man, I shall not copy Napoleon; but I am an honest man. I shall imitate Washington. My name, the name of Bonaparte, will be inscribed on two pages of the history of France: on the first there will be crime and glory, on the second probity and honor. And the second will perhaps be worth the first. Why? Because if Napoleon is the greater, Washington is the better man. Between the guilty hero and the good citizen I choose the good citizen. Such is my ambition.”