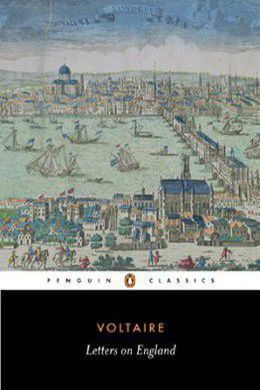 Also known as the Lettres anglaises ou philosophiques, Voltaire’s response to his exile in England offered the French public of 1734 a panoramic view of British culture. Perceiving them as a veiled attack against the ancient regime, however, the French government ordered the letters burned and Voltaire persecuted.

I was of opinion that the doctrine and history of so extraordinary a people were worthy the attention of the curious. To acquaint myself with them I made a visit to one of the most eminent Quakers in England, who, after having traded thirty years, had the wisdom to prescribe limits to his fortune and to his desires, and was settled in a little solitude not far from London. Being come into it, I perceived a small but regularly built house, vastly neat, but without the least pomp of furniture. The Quaker who owned it was a hale, ruddy–complexioned old man, who had never been afflicted with sickness because he had always been insensible to passions, and a perfect stranger to intemperance. I never in my life saw a more noble or a more engaging aspect than his. He was dressed like those of his persuasion, in a plain coat without pleats in the sides, or buttons on the pockets and sleeves; and had on a beaver, the brims of which were horizontal like those of our clergy. He did not uncover himself when I appeared, and advanced towards me without once stooping his body; but there appeared more politeness in the open, humane air of his countenance, than in the custom of drawing one leg behind the other, and taking that from the head which is made to cover it. “Friend,” says he to me, “I perceive thou art a stranger, but if I can do anything for thee, only tell me.” “Sir,” said I to him, bending forwards and advancing, as is usual with us, one leg towards him, “I flatter myself that my just curiosity will not give you the least offence, and that you’ll do me the honour to inform me of the particulars of your religion.” “The people of thy country,” replied the Quaker, “are too full of their bows and compliments, but I never yet met with one of them who had so much curiosity as thyself. Come in, and let us first dine together.” I still continued to make some very unseasonable ceremonies, it not being easy to disengage one’s self at once from habits we have been long used to; and after taking part in a frugal meal, which began and ended with a prayer to God, I began to question my courteous host. I opened with that which good Catholics have more than once made to Huguenots. “My dear sir,” said I, “were you ever baptised?” “I never was,” replied the Quaker, “nor any of my brethren.” “Zounds!” say I to him, “you are not Christians, then.” “Friend,” replies the old man in a soft tone of voice, “swear not; we are Christians, and endeavour to be good Christians, but we are not of opinion that the sprinkling water on a child’s head makes him a Christian.” “Heavens!” say I, shocked at his impiety, “you have then forgot that Christ was baptised by St. John.” “Friend,” replies the mild Quaker once again, “swear not; Christ indeed was baptised by John, but He himself never baptised anyone. We are the disciples of Christ, not of John.” I pitied very much the sincerity of my worthy Quaker, and was absolutely for forcing him to get himself christened. “Were that all,” replied he very gravely, “we would submit cheerfully to baptism, purely in compliance with thy weakness, for we don’t condemn any person who uses it; but then we think that those who profess a religion of so holy, so spiritual a nature as that of Christ, ought to abstain to the utmost of their power from the Jewish ceremonies.” “O unaccountable!” say I: “what! baptism a Jewish ceremony?” “Yes, my friend,” says he, “so truly Jewish, that a great many Jews use the baptism of John to this day. Look into ancient authors, and thou wilt find that John only revived this practice; and that it had been used by the Hebrews, long before his time, in like manner as the Mahometans imitated the Ishmaelites in their pilgrimages to Mecca. Jesus indeed submitted to the baptism of John, as He had suffered Himself to be circumcised; but circumcision and the washing with water ought to be abolished by the baptism of Christ, that baptism of the Spirit, that ablution of the soul, which is the salvation of mankind. Thus the forerunner said, ‘I indeed baptise you with water unto repentance; but He that cometh after me is mightier than I, whose shoes I am not worthy to bear: he shall baptise you with the Holy Ghost and with fire.’ Likewise Paul, the great apostle of the Gentiles, writes as follows to the Corinthians, ‘Christ sent me not to baptise, but to preach the Gospel;’ and indeed Paul never baptised but two persons with water, and that very much against his inclinations. He circumcised his disciple Timothy, and the other disciples likewise circumcised all who were willing to submit to that carnal ordinance. But art thou circumcised?” added he. “I have not the honour to be so,” say I. “Well, friend,” continues the Quaker, “thou art a Christian without being circumcised, and I am one without being baptised.”