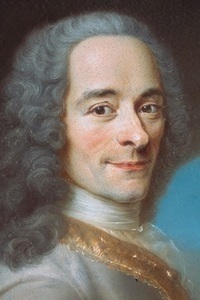 François-Marie Arouet, better known by the pen name Voltaire, was a French Enlightenment writer, essayist, and philosopher known for his wit and his defense of civil liberties, including both freedom of religion and free trade. Voltaire was a prolific writer and produced works in almost every literary form including plays, poetry, novels, essays, historical and scientific works, more than 20,000 letters and more than 2,000 books and pamphlets. He was an outspoken supporter of social reform, despite strict censorship laws and harsh penalties for those who broke them. A satirical polemicist, he frequently made use of his works to criticize Catholic Church dogma and the French institutions of his day. Voltaire was one of several Enlightenment figures (along with Montesquieu, John Locke, Thomas Hobbes, and Jean-Jacques Rousseau) whose works and ideas influenced important thinkers of both the American and French Revolutions. (source: Wikipedia)

Also known as the Lettres anglaises ou philosophiques, Voltaire’s response to his exile in England offered the French public of 1734 a panoramic view of...read more »

Micromegas is an inhabitant of the star Sirius, 120,000 feet tall and accompanied by a dwarf from Saturn who is 6000 feet tall. During a grand tour of t...read more »

The Philosophical Dictionary is one of the most lively, amusing and various books of fact and illustration now in existence; comprising information adap...read more »

This novel tells the story of Zadig, a philosopher in ancient Babylonia. The author does not attempt any historical accuracy, and some of the problems Z...read more »