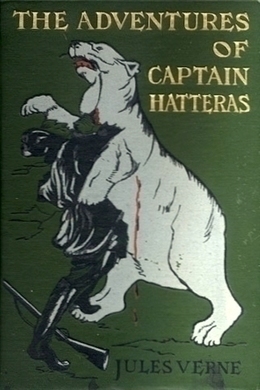 The Adventures of Captain Hatteras

English at the North Pole / Desert of Ice

First Mate Shandon receives a mysterious letter asking him to construct a reinforced steamship in Liverpool. As he heads out for Melville Bay and the Arctic labyrinth, a crewman finally reveals himself as Captain John Hatteras, and his obsession–to get to the North Pole. After experiencing appalling cold and hunger, the captain treks across the frozen wastes in search of fuel. Abandoned by most of his crew, and accompanied by a rival American explorer, Hatteras continues his journey to the Pole, encountering endless perils and adventures along the way.

This announcement appeared in the Liverpool Herald of April 5, 1860.

The sailing of a brig is not a matter of great importance for the chief commercial city of England. Who would take notice of it in so great a throng of ships of all sizes and of every country, that dry-docks covering two leagues scarcely contain them?

Nevertheless, from early morning on the 6th of April, a large crowd collected on the quays of the New Prince’s Docks; all the sailors of the place seemed to have assembled there. The workingmen of the neighboring wharves had abandoned their tasks, tradesmen had left their gloomy shops, and the merchants their empty warehouses. The many-colored omnibuses which pass outside of the docks were discharging, every minute, their load of sight-seers; the whole city seemed to care for nothing except watching the departure of the Forward.

The Forward was a vessel of one hundred and seventy tons, rigged as a brig, and carrying a screw and a steam-engine of one hundred and twenty horse-power. One would have very easily confounded it with the other brigs in the harbor. But if it presented no especial difference to the eye of the public, yet those who were familiar with ships noticed certain peculiarities which could not escape a sailor’s keen glance.

Thus, on the Nautilus, which was lying at anchor near her, a group of sailors were trying to make out the probable destination of the Forward.

“What do you say to her masts?” said one; “steamers don’t usually carry so much sail.”

“It must be,” answered a red-faced quartermaster, “that she relies more on her sails than on her engine; and if her topsails are of that size, it’s probably because the lower sails are to be laid back. So I’m sure the Forward is going either to the Arctic or Antarctic Ocean, where the icebergs stop the wind more than suits a solid ship.”

“You must be right, Mr. Cornhill,” said a third sailor. “Do you notice how straight her stem is?”

“Besides,” said Mr. Cornhill, “she carries a steel ram forward, as sharp as a razor; if the Forward, going at full speed, should run into a three-decker, she would cut her in two.”

“That’s true,” answered a Mersey pilot, “for that brig can easily run fourteen knots under steam. She was a sight to see on her trial trip. On my word, she’s a swift boat.”

“And she goes well, too, under sail,” continued the quartermaster; “close to the wind, and she’s easily steered. Now that ship is going to the polar seas, or my name is not Cornhill. And then, see there! Do you notice that large helm-port over the head of her rudder?”

“That’s so,” said some of the sailors; “but what does that prove?”

“That proves, my men,” replied the quartermaster with a scornful smile, “that you can neither see nor think; it proves that they wanted to leave the head of the rudder free, so that it might be unshipped and shipped again easily. Don’t you know that’s what they have to do very often in the ice?”

“You are right,” answered the sailors of the Nautilus.

“And besides,” said one, “the lading of the brig goes to prove what Mr. Cornhill has said. I heard it from Clifton, who has shipped on her. The Forward carries provisions for five or six years, and coal in proportion. Coal and provisions are all she carries, and a quantity of woollen and sealskin clothing.”

“Well,” said Mr. Cornhill, “there’s no doubt about it. But, my friend, since you know Clifton, hasn’t he told you where she’s bound?”

“He couldn’t tell me, for he didn’t know; the whole crew was shipped in that way. Where is he going? He won’t know till he gets there.”

“Nor yet if they are going to Davy Jones’s locker,” said one scoffer, “as it seems to me they are.”

“But then, their pay,” continued the friend of Clifton enthusiastically,–“their pay! it’s five times what a sailor usually gets. If it had not been for that, Richard Shandon would not have got a man. A strangely shaped boat, going no one knows where, and as if it never intended coming back! As for me, I should not have cared to ship in her.”

“Whether you would or not,” answered Mr. Cornhill, “you could never have shipped in the Forward.”

“Because you would not have answered the conditions. I heard that married men were not taken. Now you belong to that class. So you need not say what you would or would not do, since it’s all breath thrown away.”

The sailor who was thus snubbed burst out laughing, as did his companions, showing in this way that Mr. Cornhill’s remarks were true.

“There’s nothing but boldness about the ship,” continued Cornhill, well pleased with himself. “The Forward,–forward to what? Without saying that nobody knows who her captain is.”