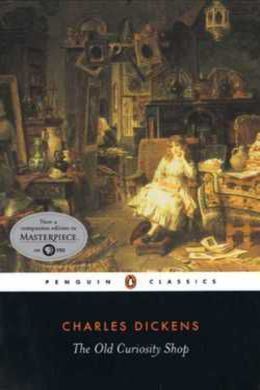 The Old Curiosity Shop is the story of Little Nell, a beautiful and virtuous young girl who lives with her grandfather in his shop of curiosities. Her only friend is Kit, an honest young lad who works at the shop, and whom she is teaching to write. Unbeknownst to Nell, her grandfather is obsessed with their precarious financial position, trying to make Nell a good inheritance by winning at cards. He keeps these nocturnal activities a secret but borrows heavily from the evil Quilp. Losing everything, the grandfather and Nell are forced to go on the run.

Night is generally my time for walking. In the summer I often leave home early in the morning, and roam about fields and lanes all day, or even escape for days or weeks together; but, saving in the country, I seldom go out until after dark, though, Heaven be thanked, I love its light and feel the cheerfulness it sheds upon the earth, as much as any creature living.

I have fallen insensibly into this habit, both because it favours my infirmity and because it affords me greater opportunity of speculating on the characters and occupations of those who fill the streets. The glare and hurry of broad noon are not adapted to idle pursuits like mine; a glimpse of passing faces caught by the light of a street–lamp or a shop window is often better for my purpose than their full revelation in the daylight; and, if I must add the truth, night is kinder in this respect than day, which too often destroys an air–built castle at the moment of its completion, without the least ceremony or remorse.

That constant pacing to and fro, that never–ending restlessness, that incessant tread of feet wearing the rough stones smooth and glossy—is it not a wonder how the dwellers in narrows ways can bear to hear it! Think of a sick man in such a place as Saint Martin’s Court, listening to the footsteps, and in the midst of pain and weariness obliged, despite himself (as though it were a task he must perform) to detect the child’s step from the man’s, the slipshod beggar from the booted exquisite, the lounging from the busy, the dull heel of the sauntering outcast from the quick tread of an expectant pleasure–seeker—think of the hum and noise always being present to his sense, and of the stream of life that will not stop, pouring on, on, on, through all his restless dreams, as if he were condemned to lie, dead but conscious, in a noisy churchyard, and had no hope of rest for centuries to come.

Then, the crowds for ever passing and repassing on the bridges (on those which are free of toil at last), where many stop on fine evenings looking listlessly down upon the water with some vague idea that by and by it runs between green banks which grow wider and wider until at last it joins the broad vast sea—where some halt to rest from heavy loads and think as they look over the parapet that to smoke and lounge away one’s life, and lie sleeping in the sun upon a hot tarpaulin, in a dull, slow, sluggish barge, must be happiness unalloyed—and where some, and a very different class, pause with heavier loads than they, remembering to have heard or read in old time that drowning was not a hard death, but of all means of suicide the easiest and best.

Covent Garden Market at sunrise too, in the spring or summer, when the fragrance of sweet flowers is in the air, over–powering even the unwholesome streams of last night’s debauchery, and driving the dusky thrush, whose cage has hung outside a garret window all night long, half mad with joy! Poor bird! the only neighbouring thing at all akin to the other little captives, some of whom, shrinking from the hot hands of drunken purchasers, lie drooping on the path already, while others, soddened by close contact, await the time when they shall be watered and freshened up to please more sober company, and make old clerks who pass them on their road to business, wonder what has filled their breasts with visions of the country.

But my present purpose is not to expatiate upon my walks. The story I am about to relate, and to which I shall recur at intervals, arose out of one of these rambles; and thus I have been led to speak of them by way of preface.

One night I had roamed into the City, and was walking slowly on in my usual way, musing upon a great many things, when I was arrested by an inquiry, the purport of which did not reach me, but which seemed to be addressed to myself, and was preferred in a soft sweet voice that struck me very pleasantly. I turned hastily round and found at my elbow a pretty little girl, who begged to be directed to a certain street at a considerable distance, and indeed in quite another quarter of the town.

‘I know that, sir,’ she replied timidly. ‘I am afraid it is a very long way, for I came from there to–night.’

‘Alone?’ said I, in some surprise.

‘Oh, yes, I don’t mind that, but I am a little frightened now, for I had lost my road.’

‘And what made you ask it of me? Suppose I should tell you wrong?’

‘I am sure you will not do that,’ said the little creature,’ you are such a very old gentleman, and walk so slow yourself.’

I cannot describe how much I was impressed by this appeal and the energy with which it was made, which brought a tear into the child’s clear eye, and made her slight figure tremble as she looked up into my face.