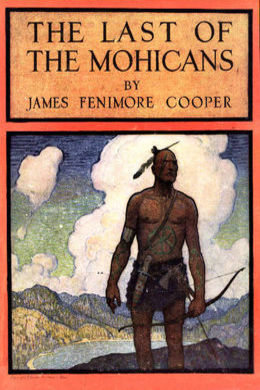 The Last of the Mohicans

While the French and Indians besiege Fort William Henry, Cora and Alice Munro, daughters of the English commander, are on their way to join him. They are accompanied by Major Duncan Heyward, Alice’s fiance, and by the treacherous Indian Magua, who secretly serves the French. Magua plans to betray the party to the Iroquois, and to claim Cora as his squaw, but he is foiled by the scout Hawkeye and his companions, Chingachgook and his son Uncas, who deliver the girls to their father. After the fall of the fort, the girls are given safe passage by the French, but Magua captures them and they become prisoners of the Indians. To rescue Alice and Cora, Hawkeye and Uncas lead the Mohicans against the Hurons, an action filled with unforeseen consequences for all of them. The Last of the Mohicans is a story of romance and adventure on the American frontier. It is a story of love and loyalty, and of America’s coming of age.

It was a feature peculiar to the colonial wars of North America, that the toils and dangers of the wilderness were to be encountered before the adverse hosts could meet. A wide and apparently an impervious boundary of forests severed the possessions of the hostile provinces of France and England. The hardy colonist, and the trained European who fought at his side, frequently expended months in struggling against the rapids of the streams, or in effecting the rugged passes of the mountains, in quest of an opportunity to exhibit their courage in a more martial conflict. But, emulating the patience and self-denial of the practised native warriors, they learned to overcome every difficulty; and it would seem that, in time, there was no recess of the woods so dark, nor any secret place so lovely, that it might claim exemption from the inroads of those who had pledged their blood to satiate their vengeance, or to uphold the cold and selfish policy of the distant monarchs of Europe.

Perhaps no district throughout the wide extent of the intermediate frontiers can furnish a livelier picture of the cruelty and fierceness of the savage warfare of those periods than the country which lies between the head waters of the Hudson and the adjacent lakes.

The facilities which nature had there offered to the march of the combatants were too obvious to be neglected. The lengthened sheet of the Champlain stretched from the frontiers of Canada, deep within the borders of the neighboring province of New York, forming a natural passage across half the distance that the French were compelled to master in order to strike their enemies. Near its southern termination, it received the contributions of another lake, whose waters were so limpid as to have been exclusively selected by the Jesuit missionaries to perform the typical purification of baptism, and to obtain for it the title of lake “du Saint Sacrement.” The less zealous English thought they conferred a sufficient honor on its unsullied fountains, when they bestowed the name of their reigning prince, the second of the house of Hanover. The two united to rob the untutored possessors of its wooded scenery of their native right to perpetuate its original appellation of “Horican.”[1]

Winding its way among countless islands, and imbedded in mountains, the “holy lake” extended a dozen leagues still farther to the south. With the high plain that there interposed itself to the further passage of the water, commenced a portage of as many miles, which conducted the adventurer to the banks of the Hudson, at a point where, with the usual obstructions of the rapids, or rifts, as they were then termed in the language of the country, the river became navigable to the tide.

While, in the pursuit of their daring plans of annoyance, the restless enterprise of the French even attempted the distant and difficult gorges of the Alleghany, it may easily be imagined that their proverbial acuteness would not overlook the natural advantages of the district we have just described. It became, emphatically, the bloody arena, in which most of the battles for the mastery of the colonies were contested. Forts were erected at the different points that commanded the facilities of the route, and were taken and retaken, razed and rebuilt, as victory alighted on the hostile banners. While the husbandman shrank back from the dangerous passes, within the safer boundaries of the more ancient settlements, armies larger than those that had often disposed of the sceptres of the mother countries, were seen to bury themselves in these forests, whence they rarely returned but in skeleton bands, that were haggard with care, or dejected by defeat. Though the arts of peace were unknown to this fatal region, its forests were alive with men; its shades and glens rang with the sounds of martial music, and the echoes of its mountains threw back the laugh, or repeated the wanton cry, of many a gallant and reckless youth, as he hurried by them, in the noontide of his spirits, to slumber in a long night of forgetfulness.

It was in this scene of strife and bloodshed that the incidents we shall attempt to relate occurred, during the third year of the war which England and France last waged for the possession of a country that neither was destined to retain.

The imbecility of her military leaders abroad, and the fatal want of energy in her councils at home, had lowered the character of Great Britain from the proud elevation on which it had been placed, by the talents and enterprise of her former warriors and statesmen. No longer dreaded by her enemies, her servants were fast losing the confidence of self-respect. In this mortifying abasement, the colonists, though innocent of her imbecility, and too humble to be the agents of her blunders, were but the natural participators.