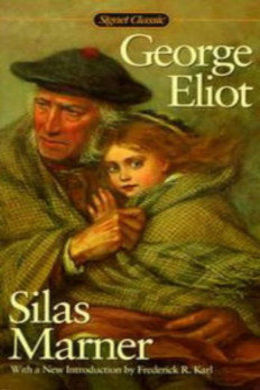 The Weaver of Raveloe

Accused of a crime he didn’t commit and unjustly forced from his home town, Silas lives a reclusive and godless life, finding love and companionship only in material objects. It will take the theft of his gold and the discovery of an abandoned infant to remind him of the importance of human relationships and faith. Mary Ann Evans, writing under her pen name of George Eliot, carefully weaves the interaction of plot and character, and, in so doing, depicts Silas Marner’s redemption and rebirth through his love and protection of the orphaned girl and the possibility of losing her. Throughout the book, Eliot also takes the opportunity to voice her feelings about industrialization, religion, and social class distinctions.

In the days when the spinning–wheels hummed busily in the farmhouses—and even great ladies, clothed in silk and thread–lace, had their toy spinning–wheels of polished oak—there might be seen in districts far away among the lanes, or deep in the bosom of the hills, certain pallid undersized men, who, by the side of the brawny country–folk, looked like the remnants of a disinherited race. The shepherd’s dog barked fiercely when one of these alien–looking men appeared on the upland, dark against the early winter sunset; for what dog likes a figure bent under a heavy bag?—and these pale men rarely stirred abroad without that mysterious burden. The shepherd himself, though he had good reason to believe that the bag held nothing but flaxen thread, or else the long rolls of strong linen spun from that thread, was not quite sure that this trade of weaving, indispensable though it was, could be carried on entirely without the help of the Evil One. In that far–off time superstition clung easily round every person or thing that was at all unwonted, or even intermittent and occasional merely, like the visits of the pedlar or the knife–grinder. No one knew where wandering men had their homes or their origin; and how was a man to be explained unless you at least knew somebody who knew his father and mother? To the peasants of old times, the world outside their own direct experience was a region of vagueness and mystery: to their untravelled thought a state of wandering was a conception as dim as the winter life of the swallows that came back with the spring; and even a settler, if he came from distant parts, hardly ever ceased to be viewed with a remnant of distrust, which would have prevented any surprise if a long course of inoffensive conduct on his part had ended in the commission of a crime; especially if he had any reputation for knowledge, or showed any skill in handicraft. All cleverness, whether in the rapid use of that difficult instrument the tongue, or in some other art unfamiliar to villagers, was in itself suspicious: honest folk, born and bred in a visible manner, were mostly not overwise or clever—at least, not beyond such a matter as knowing the signs of the weather; and the process by which rapidity and dexterity of any kind were acquired was so wholly hidden, that they partook of the nature of conjuring. In this way it came to pass that those scattered linen–weavers—emigrants from the town into the country—were to the last regarded as aliens by their rustic neighbours, and usually contracted the eccentric habits which belong to a state of loneliness.

In the early years of this century, such a linen–weaver, named Silas Marner, worked at his vocation in a stone cottage that stood among the nutty hedgerows near the village of Raveloe, and not far from the edge of a deserted stone–pit. The questionable sound of Silas’s loom, so unlike the natural cheerful trotting of the winnowing–machine, or the simpler rhythm of the flail, had a half–fearful fascination for the Raveloe boys, who would often leave off their nutting or birds’–nesting to peep in at the window of the stone cottage, counterbalancing a certain awe at the mysterious action of the loom, by a pleasant sense of scornful superiority, drawn from the mockery of its alternating noises, along with the bent, tread–mill attitude of the weaver. But sometimes it happened that Marner, pausing to adjust an irregularity in his thread, became aware of the small scoundrels, and, though chary of his time, he liked their intrusion so ill that he would descend from his loom, and, opening the door, would fix on them a gaze that was always enough to make them take to their legs in terror. For how was it possible to believe that those large brown protuberant eyes in Silas Marner’s pale face really saw nothing very distinctly that was not close to them, and not rather that their dreadful stare could dart cramp, or rickets, or a wry mouth at any boy who happened to be in the rear? They had, perhaps, heard their fathers and mothers hint that Silas Marner could cure folks’ rheumatism if he had a mind, and add, still more darkly, that if you could only speak the devil fair enough, he might save you the cost of the doctor. Such strange lingering echoes of the old demon–worship might perhaps even now be caught by the diligent listener among the grey–haired peasantry; for the rude mind with difficulty associates the ideas of power and benignity.