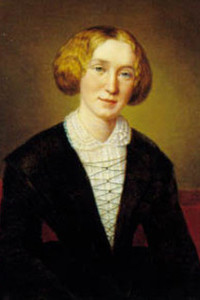 Mary Anne Evans, better known by her pen name George Eliot, was an English novelist. She was one of the leading writers of the Victorian era. Her novels, largely set in provincial England, are well known for their realism and psychological insight. She used a male pen name, she said, to ensure that her works were taken seriously. Female authors were published under their own names, but Eliot wanted to ensure that she was not seen as merely a writer of romances. An additional factor may have been a desire to shield her private life from public scrutiny and to prevent scandals attending her relationship with the married George Henry Lewes.

The seemingly peaceful country village of Hayslope is the setting for this ambitious first novel by one of the nineteenth century’s great novelists. Wit...read more »

George Eliot’s final novel and her most ambitious work, Daniel Deronda contrasts the moral laxity of the British aristocracy with the dedicated fervor o...read more »

When the young nobleman Harold Transome returns to England from the colonies with a self-made fortune, he scandalizes the town of Treby Magna with his d...read more »

Written between the inception of Middlemarch and the completion, seven years later, of Daniel Deronda this book is a charming treatment of a subject tak...read more »

Set in late fifteenth-century Italy, in the Renaissance Florence of Machiavelli and the Medicis, Romola is the most exotic and adventurous of George Eli...read more »

When Scenes of Clerical Life, George Eliot’s first novel, was published anonymously in Blackwood’s Edinburgh Magazine in 1857, it was immediately recogn...read more »

Accused of a crime he didn’t commit and unjustly forced from his home town, Silas lives a reclusive and godless life, finding love and companionship onl...read more »

The tale of a man who is incapacitated by visions of the future and the cacophony of overheard thoughts, and yet who can’t help trying to subvert his vi...read more »

This novel’s unsentimental evocation of childhood in the English countryside stands as an enduring triumph; but equally memorable are its portrayal of a...read more »