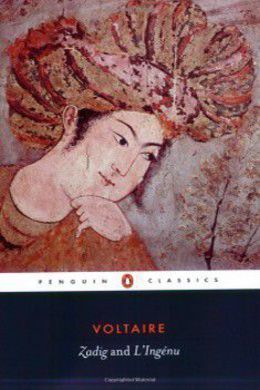 The Book of Fate

This novel tells the story of Zadig, a philosopher in ancient Babylonia. The author does not attempt any historical accuracy, and some of the problems Zadig faces are thinly disguised references to social and political problems of Voltaire’s own day. The book is philosophical in nature, and presents human life as in the hands of a destiny beyond human control. It is a story of religious and metaphysical orthodoxy, both of which Voltaire challenges with his presentation of the moral revolution taking place in Zadig himself. Voltaire’s skilful use of the literary devices of contradiction and juxtaposition are shown in beautiful form in this prose. After Candide, it is considered one of his most celebrated works. (source: Wikipedia)

In the Reign of King Moabdar, there was a young Man, a Native of Babylon, by name Zadig; who was not only endowed by Nature with an uncommon Genius, but born of illustrious Parents, who bestowed on him an Education no ways inferior to his Birth. Tho’ rich and young, he knew how to give a Check to his Passions; he was no ways self–conceited; he didn’t always act up to the strictest Rules of Reason himself, and knew how to look on the Foibles of others, with an Eye of Indulgence. Every one was surpriz’d to find, that notwithstanding he had such a Fund of Wit, he never insulted; nay, never so much as rallied any of his Companions, for that Tittle Tattle, which was so vague and empty, so noisy and confus’d; for those rash Reflections, those illiterate Conclusions, and those insipid Jokes; and, in short, for that Flow of unmeaning Words, which was call’d polite Conversation in Babylon. He had learned from the first Book of Zoroaster, that Self–love is like a Bladder full blown, which when once prick’d, discharges a kind of petty Tempest. Zadig, in particular, never boasted of his Contempt of the Fair Sex, or of his Facility to make Conquests amongst them. He was of a generous Spirit; insomuch, that he was not afraid of obliging even an ungrateful Man; strictly adhering to that wise Maxim of Zoroaster. When you are eating, throw an Offal to the Dogs that are under the Table, lest they should be tempted to bite you. He was as wise as he could well be wish’d; since he was fond of no Company, but such as were distinguish’d for Men of Sense. As he was well–grounded, in all the Sciences of the antient Chaldeans, he was no Stranger to those Principles of Natural Philosophy, which were then known: And understood as much of Metaphysics as any one in all Ages after him; that is to say, he knew little or nothing of the Matter. He was firmly convinc’d, that the Year consisted of 365 Days and an half, tho’ directly repugnant to the new Philosophy of the Age he liv’d in; and that the Sun was situated in the Center of the Earth; And when the Chief Magi told him, with an imperious Air, that he maintain’d erroneous Principles; and that it was an Indignity offered to the Government under which he liv’d, to imagine the Sun should roll round its own Axis, and that the Year consisted of twelve Months, he knew how to sit still and quiet, without shewing the least Tokens of Resentment or Contempt.