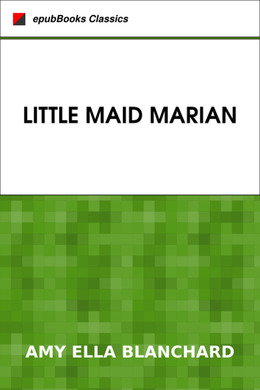 Maid Marian, an orphaned heiress, struggles against scheming, duplicitous relatives for the right to her own lands. A medieval romance featuring Robin Hood, Maid Marian, Friar Tuck, and Prince John. Lampoons institutions such as the monarchy and the church in the post-Napoleonic era.

The cat and kitten were both eating supper and Marian was watching them. Her own supper of bread and milk she had finished, and had taken the remains of it to Tippy and Dippy. Marian did not care very much for bread and milk, but the cat and kitten did, as was plainly shown by the way they hunched themselves down in front of the tin pan into which Marian had poured their supper.

In the next room Grandpa and Grandma Otway were sitting and little bits of their talk came to Marian’s ears once in a while when her thoughts ceased to wander in other directions. “If only one could have faith to believe implicitly,” Grandma Otway said.

“If ye have faith as a grain of mustard seed, and should say to that mountain, be ye removed,” quoted Grandpa Otway.

Marian sighed. They talked that way very often, she remembered, and she herself had grown to consider it quite as difficult as did her grandmother, to exercise complete faith. She had made numberless mighty efforts, and yet things did not come out as she supposed they ought. She sat gravely watching the cat and kitten lap up the last drop of milk and carefully clean the sides of the pan in a manner quite inelegant for humans, but no doubt entirely a matter of etiquette in cat society, and then when Tippy, having done her duty by the pan, turned her attention to making Dippy tidy, Marian walked slowly away.

The sun was setting behind the hills, and touching the tops of the trees along their base; further away the mountains were very dark against a yellow line of sky. Marian continued her way thoughtfully toward the garden, turned off before she reached the gate and climbed a ladder which leaned against the side of the old brick wall. From the ladder one could reach a long limb of a scraggy apple tree upon which hung early apples nearly ripe. Marian went up the ladder very carefully, taking care not to catch her frock upon a nail or a projecting twig as she crept along the stout limb to settle herself in a crotch of the tree. From this spot she could see the distant sea, pinky purple, and shimmering silver.

Marian did not gaze at this, however, but turned her face toward the mountains. She clasped her hands tightly and repeated firmly: “Be ye removed into the midst of the sea. Be ye removed into the midst of the sea.” Then she waited, but the mountain did not budge an inch, though the child kept her eyes fixed upon it. Twice, three times, she repeated the words, but the mountain remained immovable. “I knew it; I just knew it,” exclaimed the child when she had made her final effort, “and now I want to know how large a mustard seed is. To–morrow I’ll go ask Mrs. Hunt.”

It was to Mrs. Hunt that she took all such questions, for she hesitated to talk of very personal things to her grandparents. They would ask her such sharp questions, and sometimes would smile in a superior way when they did not say: “Oh, that is not a subject to discuss with children; run along and play with Tippy.” She did not always want to be playing with Tippy when such mighty problems were uppermost. She had many times tested her faith with the mountain, but had always come away humiliated by the thought that her faith must be too weak.

Though she brought her test to bear upon the mountain there was another thing she did not dare to experiment with, though she always intended to do so when the mountain should answer her command to be removed. To be sure it would not make much difference to her if the mountain should remove into the sea; it probably looked quite as well where it was, and Marian supposed that no one would care to have its place changed, but it made a great and mighty difference to her about this other thing. She had never breathed her ardent wish to any one, not even to Mrs. Hunt, and now that this fresh test of faith had failed she would have to gather up a new stock before she could try again.

The purple and pink and gold were fading; the sea looked gray; the distant mountain was hidden under a cloud when Marian climbed down from her perch to answer her grandmother’s call: “Marian, Marian, where are you? Come in out of the night air; the dew is falling.” Dippy was chasing moths in the garden as Marian took her way toward the house. She watched him leaping up as each soft–winged creature flitted by. When he failed to catch his prize he opened his mouth in a mute meow, and looked at Marian as if asking her to help him.

“You mustn’t catch moths, Dippy,” said Marian. “They might disagree with you. I should think anyhow, that they would be very dry eating, and besides it is wicked to destroy innocent little creatures. Come, you must go in with me.”