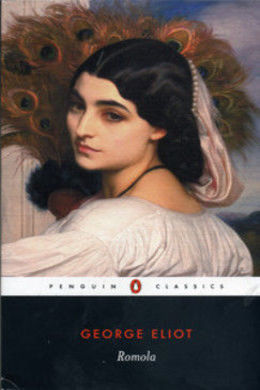 Set in late fifteenth-century Italy, in the Renaissance Florence of Machiavelli and the Medicis, Romola is the most exotic and adventurous of George Eliot’s novels. It charts the career and martyrdom of the charismatic religious leader Savonarola, who rebelled against the humanistspirit of the age and burned books on a “bonfire of vanities.” With this story, Eliot brilliantly reconstructs in vivid detail a turning-point in the intellectual history of Europe.

More than three centuries and a half ago, in the mid spring–time of 1492, we are sure that the angel of the dawn, as he travelled with broad slow wing from the Levant to the Pillars of Hercules, and from the summits of the Caucasus across all the snowy Alpine ridges to the dark nakedness of the Western isles, saw nearly the same outline of firm land and unstable sea—saw the same great mountain shadows on the same valleys as he has seen to–day—saw olive mounts, and pine forests, and the broad plains green with young corn or rain–freshened grass—saw the domes and spires of cities rising by the river–sides or mingled with the sedge–like masts on the many–curved sea–coast, in the same spots where they rise to–day. And as the faint light of his course pierced into the dwellings of men, it fell, as now, on the rosy warmth of nestling children; on the haggard waking of sorrow and sickness; on the hasty uprising of the hard–handed labourer; and on the late sleep of the night–student, who had been questioning the stars or the sages, or his own soul, for that hidden knowledge which would break through the barrier of man’s brief life, and show its dark path, that seemed to bend no whither, to be an arc in an immeasurable circle of light and glory. The great river–courses which have shaped the lives of men have hardly changed; and those other streams, the life–currents that ebb and flow in human hearts, pulsate to the same great needs, the same great loves and terrors. As our thought follows close in the slow wake of the dawn, we are impressed with the broad sameness of the human lot, which never alters in the main headings of its history—hunger and labour, seed–time and harvest, love and death.

Even if, instead of following the dim daybreak, our imagination pauses on a certain historical spot and awaits the fuller morning, we may see a world–famous city, which has hardly changed its outline since the days of Columbus, seeming to stand as an almost unviolated symbol, amidst the flux of human things, to remind us that we still resemble the men of the past more than we differ from them, as the great mechanical principles on which those domes and towers were raised must make a likeness in human building that will be broader and deeper than all possible change. And doubtless, if the spirit of a Florentine citizen, whose eyes were closed for the last time while Columbus was still waiting and arguing for the three poor vessels with which he was to set sail from the port of Palos, could return from the shades and pause where our thought is pausing, he would believe that there must still be fellowship and understanding for him among the inheritors of his birthplace.

Let us suppose that such a Shade has been permitted to revisit the glimpses of the golden morning, and is standing once more on the famous hill of San Miniato, which overlooks Florence from the south.

The Spirit is clothed in his habit as he lived: the folds of his well–lined black silk garment or lucco hang in grave unbroken lines from neck to ankle; his plain cloth cap, with its becchetto, or long hanging strip of drapery, to serve as a scarf in case of need, surmounts a penetrating face, not, perhaps, very handsome, but with a firm, well–cut mouth, kept distinctly human by a close–shaven lip and chin. It is a face charged with memories of a keen and various life passed below there on the banks of the gleaming river; and as he looks at the scene before him, the sense of familiarity is so much stronger than the perception of change, that he thinks it might be possible to descend once more amongst the streets, and take up that busy life where he left it. For it is not only the mountains and the westward–bending river that he recognises; not only the dark sides of Mount Morello opposite to him, and the long valley of the Arno that seems to stretch its grey low–tufted luxuriance to the far–off ridges of Carrara; and the steep height of Fiesole, with its crown of monastic walls and cypresses; and all the green and grey slopes sprinkled with villas which he can name as he looks at them. He sees other familiar objects much closer to his daily walks. For though he misses the seventy or more towers that once surmounted the walls, and encircled the city as with a regal diadem, his eyes will not dwell on that blank; they are drawn irresistibly to the unique tower springing, like a tall flower–stem drawn towards the sun, from the square turreted mass of the Old Palace in the very heart of the city—the tower that looks none the worse for the four centuries that have passed since he used to walk under it.