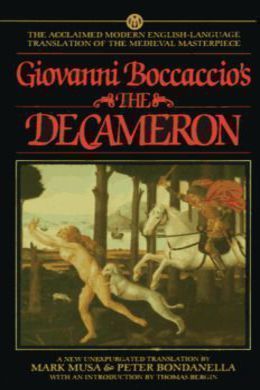 In the summer of 1348, with the plague ravaging Florence, ten young men and women take refuge in the countryside, where they entertain themselves with tales of love, death, and corruption, featuring a host of characters, from lascivious clergymen and mad kings to devious lovers and false miracle-makers. Named after the Greek for “ten days,” Boccaccio’s book of stories draws on ancient mythology, contemporary history, and everyday life, and has influenced the work of myriad writers who came after him.

As often, most gracious ladies, as, taking thought in myself, I mind me how very pitiful you are all by nature, so often do I recognize that this present work will, to your thinking, have a grievous and a weariful beginning, inasmuch as the dolorous remembrance of the late pestiferous mortality, which it beareth on its forefront, is universally irksome to all who saw or otherwise knew it. But I would not therefore have this affright you from reading further, as if in the reading you were still to fare among sighs and tears. Let this grisly beginning be none other to you than is to wayfarers a rugged and steep mountain, beyond which is situate a most fair and delightful plain, which latter cometh so much the pleasanter to them as the greater was the hardship of the ascent and the descent; for, like as dolour occupieth the extreme of gladness, even so are miseries determined by imminent joyance. This brief annoy (I say brief, inasmuch as it is contained in few pages) is straightway succeeded by the pleasance and delight which I have already promised you and which, belike, were it not aforesaid, might not be looked for from such a beginning. And in truth, could I fairly have availed to bring you to my desire otherwise than by so rugged a path as this will be I had gladly done it; but being in a manner constrained thereto, for that, without this reminiscence of our past miseries, it might not be shown what was the occasion of the coming about of the things that will hereafter be read, I have brought myself to write them. i.e. the few pages of which he speaks above.

I say, then, that the years [of the era] of the fruitful Incarnation of the Son of God had attained to the number of one thousand three hundred and forty–eight, when into the notable city of Florence, fair over every other of Italy, there came the death–dealing pestilence, which, through the operation of the heavenly bodies or of our own iniquitous dealings, being sent down upon mankind for our correction by the just wrath of God, had some years before appeared in the parts of the East and after having bereft these latter of an innumerable number of inhabitants, extending without cease from one place to another, had now unhappily spread towards the West. And thereagainst no wisdom availing nor human foresight (whereby the city was purged of many impurities by officers deputed to that end and it was forbidden unto any sick person to enter therein and many were the counsels given Syn. provisions made or means taken (consigli dati). Boccaccio constantly uses consiglio in this latter sense. for the preservation of health) nor yet humble supplications, not once but many times both in ordered processions and on other wise made unto God by devout persons,—about the coming in of the Spring of the aforesaid year, it began on horrible and miraculous wise to show forth its dolorous effects. Yet not as it had done in the East, where, if any bled at the nose, it was a manifest sign of inevitable death; nay, but in men and women alike there appeared, at the beginning of the malady, certain swellings, either on the groin or under the armpits, whereof some waxed of the bigness of a common apple, others like unto an egg, some more and some less, and these the vulgar named plague–boils. From these two parts the aforesaid death–bearing plague–boils proceeded, in brief space, to appear and come indifferently in every part of the body; wherefrom, after awhile, the fashion of the contagion began to change into black or livid blotches, which showed themselves in many [first] on the arms and about the thighs and [after spread to] every other part of the person, in some large and sparse and in others small and thick–sown; and like as the plague–boils had been first (and yet were) a very certain token of coming death, even so were these for every one to whom they came.

To the cure of these maladies nor counsel Syn. help, remedy. of physician nor virtue of any medicine appeared to avail or profit aught; on the contrary,—whether it was that the nature of the infection suffered it not or that the ignorance of the physicians (of whom, over and above the men of art, the number, both men and women, who had never had any teaching of medicine, was become exceeding great,) availed not to know whence it arose and consequently took not due measures thereagainst,—not only did few recover thereof, but well nigh all died within the third day from the appearance of the aforesaid signs, this sooner and that later, and for the most part without fever or other accident…