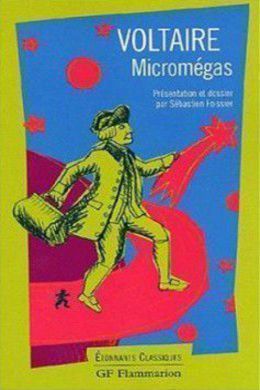 Micromegas is an inhabitant of the star Sirius, 120,000 feet tall and accompanied by a dwarf from Saturn who is 6000 feet tall. During a grand tour of the universe they visit Earth in 1737 and, using makeshift microscopes, they detect a boating party of tiny human philosophers.

On one of the planets that orbits the star named Sirius there lived a spirited young man, who I had the honor of meeting on the last voyage he made to our little ant hill. He was called Micromegas

From micros, small, and from megas, large. B. , a fitting name for anyone so great. He was eight leagues tall, or 24,000 geometric paces of five feet each.

This is how the text reads in the first editions. Others, in place of “geometers,” put “algebraists.” B. , always of use to the public, will immediately take up their pens, and will find that since Mr. Micromegas, inhabitant of the country of Sirius, is 24,000 paces tall, which is equivalent to 20,000 feet, and since we citizens of the earth are hardly five feet tall, and our sphere 9,000 leagues around; they will find, I say, that it is absolutely necessary that the sphere that produced him was 21,600,000 times greater in circumference than our little Earth. Nothing in nature is simpler or more orderly. The sovereign states of Germany or Italy, which one can traverse in a half hour, compared to the empires of Turkey, Moscow, or China, are only feeble reflections of the prodigious differences that nature has placed in all beings.

His excellency’s size being as great as I have said, all our sculptors and all our painters will agree without protest that his belt would have been 50,000 feet around, which gives him very good proportions.