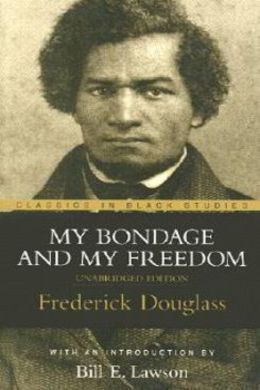 My Bondage and My Freedom

My Bondage and My Freedom is an autobiographical slave narrative written by Frederick Douglass and published in 1855. It is the second of three autobiographies written by Douglass, and is mainly an expansion of his first (Narrative of the Life of Frederick Douglass), discussing in greater detail his transition from bondage to liberty. Douglass, a former slave, following his liberation went on to become a prominent abolitionist, speaker, author, and publisher. As his narrative unfolds, Frederick Douglass-abolitionist, journalist, orator, and one of the most powerful voices to emerge from the American civil rights movement-transforms himself from slave to fugitive to reformer, leaving behind a legacy of social, intellectual, and political thought.

In Talbot county, Eastern Shore, Maryland, near Easton, the county town of that county, there is a small district of country, thinly populated, and remarkable for nothing that I know of more than for the worn-out, sandy, desert-like appearance of its soil, the general dilapidation of its farms and fences, the indigent and spiritless character of its inhabitants, and the prevalence of ague and fever.

The name of this singularly unpromising and truly famine stricken district is Tuckahoe, a name well known to all Marylanders, black and white. It was given to this section of country probably, at the first, merely in derision; or it may possibly have been applied to it, as I have heard, because some one of its earlier inhabitants had been guilty of the petty meanness of stealing a hoe–or taking a hoe that did not belong to him. Eastern Shore men usually pronounce the word took, as tuck; Took-a-hoe, therefore, is, in Maryland parlance, Tuckahoe. But, whatever may have been its origin–and about this I will not be {26} positive–that name has stuck to the district in question; and it is seldom mentioned but with contempt and derision, on account of the barrenness of its soil, and the ignorance, indolence, and poverty of its people. Decay and ruin are everywhere visible, and the thin population of the place would have quitted it long ago, but for the Choptank river, which runs through it, from which they take abundance of shad and herring, and plenty of ague and fever.

It was in this dull, flat, and unthrifty district, or neighborhood, surrounded by a white population of the lowest order, indolent and drunken to a proverb, and among slaves, who seemed to ask, “Oh! what’s the use?” every time they lifted a hoe, that I–without any fault of mine was born, and spent the first years of my childhood.

The reader will pardon so much about the place of my birth, on the score that it is always a fact of some importance to know where a man is born, if, indeed, it be important to know anything about him. In regard to the time of my birth, I cannot be as definite as I have been respecting the place. Nor, indeed, can I impart much knowledge concerning my parents. Genealogical trees do not flourish among slaves. A person of some consequence here in the north, sometimes designated father, is literally abolished in slave law and slave practice. It is only once in a while that an exception is found to this statement. I never met with a slave who could tell me how old he was. Few slave-mothers know anything of the months of the year, nor of the days of the month. They keep no family records, with marriages, births, and deaths. They measure the ages of their children by spring time, winter time, harvest time, planting time, and the like; but these soon become undistinguishable and forgotten. Like other slaves, I cannot tell how old I am. This destitution was among my earliest troubles. I learned when I grew up, that my master–and this is the case with masters generally–allowed no questions to be put to him, by which a slave might learn his{27 GRANDPARENTS} age. Such questions deemed evidence of impatience, and even of impudent curiosity. From certain events, however, the dates of which I have since learned, I suppose myself to have been born about the year 1817.

The first experience of life with me that I now remember–and I remember it but hazily–began in the family of my grandmother and grandfather. Betsey and Isaac Baily. They were quite advanced in life, and had long lived on the spot where they then resided. They were considered old settlers in the neighborhood, and, from certain circumstances, I infer that my grandmother, especially, was held in high esteem, far higher than is the lot of most colored persons in the slave states. She was a good nurse, and a capital hand at making nets for catching shad and herring; and these nets were in great demand, not only in Tuckahoe, but at Denton and Hillsboro, neighboring villages. She was not only good at making the nets, but was also somewhat famous for her good fortune in taking the fishes referred to. I have known her to be in the water half the day. Grandmother was likewise more provident than most of her neighbors in the preservation of seedling sweet potatoes, and it happened to her–as it will happen to any careful and thrifty person residing in an ignorant and improvident community–to enjoy the reputation of having been born to “good luck.” Her “good luck” was owing to the exceeding care which she took in preventing the succulent root from getting bruised in the digging, and in placing it beyond the reach of frost, by actually burying it under the hearth of her cabin during the winter months.