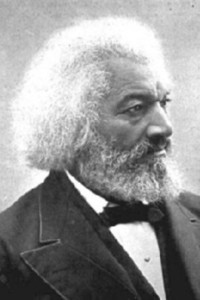 Frederick Douglass was an American abolitionist, women’s suffragist, editor, orator, author, statesman and reformer. Called “The Sage of Anacostia” and “The Lion of Anacostia”, Douglass is one of the most prominent figures in African-American and United States history. He was a firm believer in the equality of all people, whether black, female, Native American, or recent immigrant. He was fond of saying, “I would unite with anybody to do right and with nobody to do wrong.” (source: Wikipedia)

My Bondage and My Freedom is an autobiographical slave narrative written by Frederick Douglass and published in 1855. It is the second of three autobiog...read more »

The Narrative of the Life of Frederick Douglass (1845)

Born into a family of slaves, Frederick Douglass educated himself through sheer determination. His unconquered will to triumph over his circumstances ma...read more »