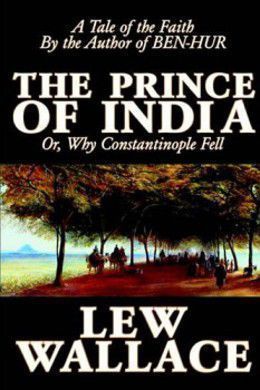 The Prince of India (Volume 1)

Volume one of Wallace’s, The Prince of India; recounting the events leading to the fall of Constantinople to the Turks in 1453. The legendary wandering jew, in the guise of a Prince of India aids in bringing about the downfall of the city and its empire by aiding and advising the Turkish Sultan Mehmed II. A glowing romance of the Byzantine Empire, presenting with extraordinary power the siege of Constantinople, and lighting its tragedy with the warm under-glow of an Oriental romance.

In the noon of a September day in the year of our dear Lord 1395, a merchant vessel nodded sleepily upon the gentle swells of warm water flowing in upon the Syrian coast. A modern seafarer, looking from the deck of one of the Messagerie steamers now plying the same line of trade, would regard her curiously, thankful to the calm which held her while he slaked his wonder, yet more thankful that he was not of her passage.

She could not have exceeded a hundred tons burthen. At the bow and stern she was decked, and those quarters were fairly raised. Amidship she was low and open, and pierced for twenty oars, ten to a side, all swaying listlessly from the narrow ports in which they were hung. Sometimes they knocked against each other. One sail, square and of a dingy white, drooped from a broad yard-arm, which was itself tilted, and now and then creaked against the yellow mast complainingly, unmindful of the simple tackle designed to keep it in control. A watchman crouched in the meagre shade of a fan-like structure overhanging the bow deck. The roofing and the floor, where exposed, were clean, even bright; in all other parts subject to the weather and the wash there was only the blackness of pitch. The steersman sat on a bench at the stern. Occasionally, from force of habit, he rested a hand upon the rudder-oar to be sure it was yet in reach. With exception of the two, the lookout and the steersman, all on board, officers, oarsmen, and sailors, were asleep–such confidence could a Mediterranean calm inspire in those accustomed to life on the beautiful sea. As if Neptune never became angry there, and blowing his conch, and smiting with his trident, splashed the sky with the yeast of waves! However, in 1395 Neptune had disappeared; like the great god Pan, he was dead.

The next remarkable thing about the ship was the absence of the signs of business usual with merchantmen. There were no barrels, boxes, bales, or packages visible. Nothing indicated a cargo. In her deepest undulations the water-line was not once submerged. The leather shields of the oar-ports were high and dry. Possibly she had passengers aboard. Ah, yes! There under the awning, stretched halfway across the deck dominated by the steersman, was a group of persons all unlike seamen. Pausing to note them, we may find the motive of the voyage.

Four men composed the group. One was lying upon a pallet, asleep yet restless. A black velvet cap had slipped from his head, giving freedom to thick black hair tinged with white. Starting from the temples, a beard with scarce a suggestion of gray swept in dark waves upon the neck and throat, and even invaded the pillow. Between the hair and beard there was a narrow margin of sallow flesh for features somewhat crowded by knots of wrinkle. His body was wrapped in a loose woollen gown of brownish-black. A hand, apparently all bone, rested upon the breast, clutching a fold of the gown. The feet twitched nervously in the loosened thongs of old-fashioned sandals. Glancing at the others of the group, it was plain this sleeper was master and they his slaves. Two of them were stretched on the bare boards at the lower end of the pallet, and they were white. The third was a son of Ethiopia of unmixed blood and gigantic frame. He sat at the left of the couch, cross-legged, and, like the rest, was in a doze; now and then, however, he raised his head, and, without fully opening his eyes, shook a fan of peacock feathers from head to foot over the recumbent figure. The two whites were clad in gowns of coarse linen belted to their waists; while, saving a cincture around his loins, the negro was naked.

There is often much personal revelation to be gleaned from the properties a man carries with him from home. Applying the rule here, by the pallet there was a walking-stick of unusual length, and severely hand-worn a little above the middle. In emergency it might have been used as a weapon. Three bundles loosely wrapped had been cast against a timber of the ship; presumably they contained the plunder of the slaves reduced to the minimum allowance of travel. But the most noticeable item was a leather roll of very ancient appearance, held by a number of broad straps deeply stamped and secured by buckles of a metal blackened like neglected silver.

The attention of a close observer would have been attracted to this parcel, not so much by its antique showing, as by the grip with which its owner clung to it with his right hand. Even in sleep he held it of infinite consequence. It could not have contained coin or any bulky matter. Possibly the man was on some special commission, with his credentials in the old roll. Ay, who was he?