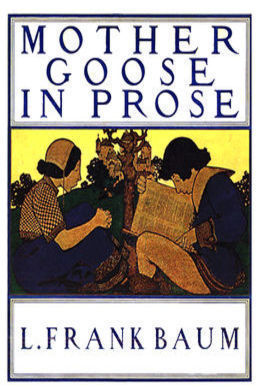 Published three years before the author achieved fame as the creator of The Wonderful Wizard of Oz, this engaging volume, inspired by well-known nursery rhymes, added an exciting new dimension to old, much-loved verses. In 22 captivating fantasies, Baum tells about Old King Cole; The Man in the Moon; The Jolly Miller; Little Bo-Peep; Tom, the Piper’s Son; The Woman Who Lived in a Shoe; Little Miss Muffet; The Cat and the Fiddle, and others. Twelve charming drawings by famed illustrator Maxfield Parrish enhance a unique collection that will delight Baum admirers, youngsters, and the young at heart.

If you have never heard the legend of Gilligren and the King’s pie, you will scarcely understand the above verse; so I will tell you the whole story, and then you will be able to better appreciate the rhyme.

Gilligren was an orphan, and lived with an uncle and aunt who were very unkind to him. They cuffed him and scolded him upon the slightest provocation, and made his life very miserable indeed. Gilligren never rebelled against this treatment, but bore their cruelty silently and with patience, although often he longed to leave them and seek a home amongst kinder people.

It so happened that when Gilligren was twelve years old the King died, and his son was to be proclaimed King in his place, and crowned with great ceremony. People were flocking to London from all parts of the country to witness the festivities, and the boy longed to go with them.

One evening he said to his uncle,

“If I had sixpence I could make my fortune.”

“Pooh! nonsense!” exclaimed his uncle, “a sixpence is a small thing. How then could you make a fortune from it?”

“That I cannot tell you,” replied Gilligren, “but if you will give me the sixpence I will go to London, and not return until I am a rich man.”

“The boy is a fool!” said his uncle, with anger; but the aunt spoke up quickly.

“Give him the money and let him go,” she said, “and then we shall be well rid of him and no longer be obliged to feed and clothe him at our expense.”

“Well,” said her husband, after a moment’s thought, “here is the money; but remember, this is all I shall ever give you, and when it is gone you must not come to me for more.”

“Never fear,” replied Gilligren, joyfully, as he put the sixpence in his pocket, “I shall not trouble you again.”

The next morning he cut a short stick to assist him in walking, and after bidding goodbye to his uncle and aunt he started upon his journey to London.

“The money will not last him two days,” said the man, as he watched Gilligren go down the turnpike road, “and when it is gone he will starve to death.”

“Or he may fall in with people who will treat him worse than we did,” rejoined the woman, “and then he ‘ll wish he had never left us.”

But Gilligren, nothing dismayed by thoughts of the future, trudged bravely along the London road. The world was before him, and the bright sunshine glorified the dusty road and lightened the tips of the dark green hedges that bordered his path. At the end of his pilgrimage was the great city, and he never doubted he would find therein proper work and proper pay, and much better treatment than he was accustomed to receive.

So, on he went, whistling merrily to while away the time, watching the sparrows skim over the fields, and enjoying to the full the unusual sights that met his eyes. At noon he overtook a carter, who divided with the boy his luncheon of bread and cheese, and for supper a farmer’s wife gave him a bowl of milk. When it grew dark he crawled under a hedge and slept soundly until dawn.

The next day he kept steadily upon his way, and toward evening met a farmer with a wagon loaded with sacks of grain.

“Where are you going, my lad?” asked the man.

“To London,” replied Gilligren, “to see the King crowned.”

“Have you any money?” enquired the farmer.

“Oh yes,” answered Gilligren, “I have a sixpence.”

“If you will give me the sixpence,” said the man, “I will give you a sack of rye for it.”

“What could I do with a sack of rye?” asked Gilligren, wonderingly.

“Take it to the mill, and get it ground into flour. With the flour you could have bread baked, and that you can sell.”

“That is a good idea,” replied Gilligren, “so here is my sixpence, and now give me the sack of rye.”

The farmer put the sixpence carefully into his pocket, and then reached under the seat of the wagon and drew out a sack, which he cast on the ground at the boy’s feet.

“There is your sack of rye,” he said, with a laugh.

“But the sack is empty!” remonstrated Gilligren.

“But only a handful!” said Gilligren, when he had opened the mouth of the sack and gazed within it.

“It is a sack of rye, nevertheless,” replied the wicked farmer, “and I did not say how much rye there would be in the sack I would give you. Let this be a lesson to you never again to buy grain without looking into the sack!” and with that he whipped up his horses and left Gilligren standing in the road with the sack at his feet and nearly ready to cry at his loss.

“My sixpence is gone,” he said to himself, “and I have received nothing in exchange but a handful of rye! How can I make my fortune with that?”

He did not despair, however, but picked up the sack and continued his way along the dusty road.