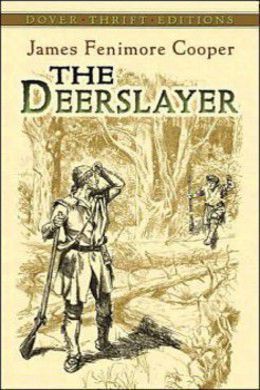 Set in 1740 during the French and Indian Wars, The Deerslayer testifies to the murderous humanity and natural beauty on which the history of America was written. In the climactic novel of the Leather-stocking Tales, Hawkeye, the noble white youth, learns to sacrifice self-interest for the common good and discovers his identity in bloody struggles among the powerful Iroquois confederacy.

On the human imagination events produce the effects of time. Thus, he who has travelled far and seen much is apt to fancy that he has lived long; and the history that most abounds in important incidents soonest assumes the aspect of antiquity. In no other way can we account for the venerable air that is already gathering around American annals. When the mind reverts to the earliest days of colonial history, the period seems remote and obscure, the thousand changes that thicken along the links of recollections, throwing back the origin of the nation to a day so distant as seemingly to reach the mists of time; and yet four lives of ordinary duration would suffice to transmit, from mouth to mouth, in the form of tradition, all that civilized man has achieved within the limits of the republic. Although New York alone possesses a population materially exceeding that of either of the four smallest kingdoms of Europe, or materially exceeding that of the entire Swiss Confederation, it is little more than two centuries since the Dutch commenced their settlement, rescuing the region from the savage state. Thus, what seems venerable by an accumulation of changes is reduced to familiarity when we come seriously to consider it solely in connection with time.

This glance into the perspective of the past will prepare the reader to look at the pictures we are about to sketch, with less surprise than he might otherwise feel; and a few additional explanations may carry him back in imagination to the precise condition of society that we desire to delineate. It is matter of history that the settlements on the eastern shores of the Hudson, such as Claverack, Kinderhook, and even Poughkeepsie, were not regarded as safe from Indian incursions a century since; and there is still standing on the banks of the same river, and within musket–shot of the wharves of Albany, a residence of a younger branch of the Van Rensselaers, that has loopholes constructed for defence against the same crafty enemy, although it dates from a period scarcely so distant. Other similar memorials of the infancy of the country are to be found, scattered through what is now deemed the very centre of American civilization, affording the plainest proofs that all we possess of security from invasion and hostile violence is the growth of but little more than the time that is frequently fulfilled by a single human life.

The incidents of this tale occurred between the years 1740 and 1745, when the settled portions of the colony of New York were confined to the four Atlantic counties, a narrow belt of country on each side of the Hudson, extending from its mouth to the falls near its head, and to a few advanced “neighborhoods” on the Mohawk and the Schoharie. Broad belts of the virgin wilderness not only reached the shores of the first river, but they even crossed it, stretching away into New England, and affording forest covers to the noiseless moccasin of the native warrior, as he trod the secret and bloody war–path. A bird’s–eye view of the whole region east of the Mississippi must then have offered one vast expanse of woods, relieved by a comparatively narrow fringe of cultivation along the sea, dotted by the glittering surfaces of lakes, and intersected by the waving lines of river. In such a vast picture of solemn solitude, the district of country we design to paint sinks into insignificance, though we feel encouraged to proceed by the conviction that, with slight and immaterial distinctions, he who succeeds in giving an accurate idea of any portion of this wild region must necessarily convey a tolerably correct notion of the whole.

Whatever may be the changes produced by man, the eternal round of the seasons is unbroken. Summer and winter, seed–time and harvest, return in their stated order with a sublime precision, affording to man one of the noblest of all the occasions he enjoys of proving the high powers of his far–reaching mind, in compassing the laws that control their exact uniformity, and in calculating their never–ending revolutions.

Centuries of summer suns had warmed the tops of the same noble oaks and pines, sending their heats even to the tenacious roots, when voices were heard calling to each other, in the depths of a forest, of which the leafy surface lay bathed in the brilliant light of a cloudless day in June, while the trunks of the trees rose in gloomy grandeur in the shades beneath.