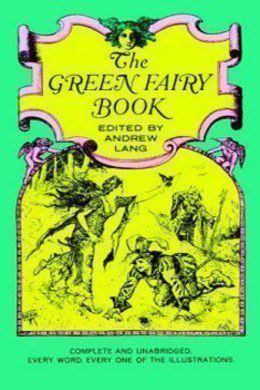 These collections are specifically intended for children, and consequently edited for that end. When Andrew began publishing these books there were almost no English fairy tale books in circulation. The series proved of great influence in children’s literature, and inspired a host of imitators. The series also proved to be an inspiration to J.R. Tolken and his Middle-Earth collection of novels.

Once upon a time there lived a King who was immensely rich. He had broad lands, and sacks overflowing with gold and silver; but he did not care a bit for all his riches, because the Queen, his wife, was dead. He shut himself up in a little room and knocked his head against the walls for grief, until his courtiers were really afraid that he would hurt himself. So they hung feather–beds between the tapestry and the walls, and then he could go on knocking his head as long as it was any consolation to him without coming to much harm. All his subjects came to see him, and said whatever they thought would comfort him: some were grave, even gloomy with him; and some agreeable, even gay; but not one could make the least impression upon him. Indeed, he hardly seemed to hear what they said. At last came a lady who was wrapped in a black mantle, and seemed to be in the deepest grief. She wept and sobbed until even the King’s attention was attracted; and when she said that, far from coming to try and diminish his grief, she, who had just lost a good husband, was come to add her tears to his, since she knew what he must be feeling, the King redoubled his lamentations. Then he told the sorrowful lady long stories about the good qualities of his departed Queen, and she in her turn recounted all the virtues of her departed husband; and this passed the time so agreeably that the King quite forgot to thump his head against the feather–beds, and the lady did not need to wipe the tears from her great blue eyes as often as before. By degrees they came to talking about other things in which the King took an interest, and in a wonderfully short time the whole kingdom was astonished by the news that the King was married again to the sorrowful lady.

Now the King had one daughter, who was just fifteen years old. Her name was Fiordelisa, and she was the prettiest and most charming Princess imaginable, always gay and merry. The new Queen, who also had a daughter, very soon sent for her to come to the Palace. Turritella, for that was her name, had been brought up by her godmother, the Fairy Mazilla, but in spite of all the care bestowed upon her, she was neither beautiful nor gracious. Indeed, when the Queen saw how ill–tempered and ugly she appeared beside Fiordelisa she was in despair, and did everything in her power to turn the King against his own daughter, in the hope that he might take a fancy to Turritella. One day the King said that it was time Fiordelisa and Turritella were married, so he would give one of them to the first suitable Prince who visited his Court. The Queen answered:

‘My daughter certainly ought to be the first to be married; she is older than yours, and a thousand times more charming!’

The King, who hated disputes, said, ‘Very well, it’s no affair of mine, settle it your own way.’

Very soon after came the news that King Charming, who was the most handsome and magnificent Prince in all the country round, was on his way to visit the King. As soon as the Queen heard this, she set all her jewellers, tailors, weavers, and embroiderers to work upon splendid dresses and ornaments for Turritella, but she told the King that Fiordelisa had no need of anything new, and the night before the King was to arrive, she bribed her waiting woman to steal away all the Princess’s own dresses and jewels, so that when the day came, and Fiordelisa wished to adorn herself as became her high rank, not even a ribbon could she find.

However, as she easily guessed who had played her such a trick, she made no complaint, but sent to the merchants for some rich stuffs. But they said that the Queen had expressly forbidden them to supply her with any, and they dared not disobey. So the Princess had nothing left to put on but the little white frock she had been wearing the day before; and dressed in that, she went down when the time of the King’s arrival came, and sat in a corner hoping to escape notice. The Queen received her guest with great ceremony, and presented him to her daughter, who was gorgeously attired, but so much splendour only made her ugliness more noticeable, and the King, after one glance at her, looked the other way. The Queen, however, only thought that he was bashful, and took pains to keep Turritella in full view. King Charming then asked it there was not another Princess, called Fiordelisa.

‘Yes,’ said Turritella, pointing with her finger, ‘there she is, trying to keep out of sight because she is not smart.’

At this Fiordelisa blushed, and looked so shy and so lovely, that the King was fairly astonished. He rose, and bowing low before her, said—

‘Sire,’ answered the Princess, ‘I assure you that I am not in the habit of wearing dresses as crumpled and untidy as this one, so I should have been better pleased if you had not seen me at all.’