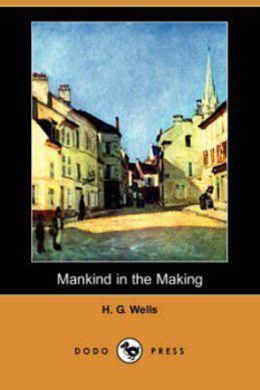 Mankind in the Making

Certain wholesale aspects of man-making with a skin of infinite delicacy that life will harden very speedily, with a discomforted writhing little body, with a weak and wailing outcry that stirs the heart, the creature comes protesting into the world, and unless death win a victory, we and chance and the forces of life in it, make out of that soft helplessness a man. Certain things there are inevitable in that man and unalterable, stamped upon his being long before the moment of his birth, the inherited things, the inherent things, his final and fundamental self.

Toleration to-day is becoming a different thing from the toleration of former times. The toleration of the past consisted very largely in saying, “You are utterly wrong and totally accurst, there is no truth but my truth and that you deny, but it is not my place to destroy you and so I let you go.” Nowadays there is a real disposition to accept the qualified nature of one’s private certainties. One may have arrived at very definite views, one may have come to beliefs quite binding upon one’s self, without supposing them to be imperative upon other people. To write “I believe” is not only less presumptuous and aggressive in such matters than to write “it is true,” but it is also nearer the reality of the case. One knows what seems true to one’s self, but we are coming to realize that the world is great and complex, beyond the utmost power of such minds as ours. Every day of life drives that conviction further home. And it is possible to maintain that in perhaps quite a great number of ethical, social, and political questions there is no absolute “truth” at all–at least for finite beings. To one intellectual temperament things may have a moral tint and aspect, differing widely from that they present to another; and yet each may be in its own way right. The wide differences in character and quality between one human being and another may quite conceivably involve not only differences in moral obligation, but differences in fundamental moral aspect–we may act and react upon each other towards a universal end, but without any universally applicable rule of conduct whatever. In some greater vision than mine, my right and wrong may be no more than hammer and anvil in the accomplishment of a design larger than I can understand. So that these papers are not written primarily for all, nor with the same intention towards all who read them. They are designed first for those who are predisposed for their reception. Then they are intended to display in an orderly manner a point of view, and how things look from that point of view, to those who are not so predisposed. These latter will either develop into adherents as they read, or, what is more likely, they will exchange a vague disorderly objection for a clearly defined and understood difference. To arrive at such an understanding is often for practical purposes as good as unanimity; for in narrowing down the issue to some central point or principle, we develop just how far those who are divergent may go together before separation or conflict become inevitable, and save something of our time and of our lives from those misunderstandings, and those secondary differences of no practical importance whatever, which make such disastrous waste of human energy.

Now the point of view which will be displayed in relation to a number of wide questions in these pages is primarily that of the writer’s. But he hopes and believes that among those who read what he has to say, there will be found not only many to understand, but some to agree with him. In many ways he is inclined to believe the development of his views may be typical of the sort of development that has gone on to a greater or lesser extent in the minds of many of the younger men during the last twenty years, and it is in that belief that he is now presenting them.

And the questions that will be dealt with in relation to this point of view are all those questions outside a man’s purely private self–if he have a purely private self–in which he interacts with his fellow-man. Our attempt will be to put in order, to reduce to principle, what is at present in countless instances a mass of inconsistent proceedings, to frame a general theory in accordance with modern conditions of social and political activity.

This is one man’s proposal, his attempt to supply a need that has oppressed him for many years, a need that he has not only found in his own schemes of conduct, but that he has observed in the thought of numberless people about him, rendering their action fragmentary, wasteful in the gross, and ineffective in the net result, the need for some general principle, some leading idea, some standard, sufficiently comprehensive to be of real guiding value in social and political matters, in many doubtful issues of private conduct, and throughout the business of dealing with one’s fellow-men. No doubt there are many who do not feel such a need at all, and with these we may part company forthwith; there are, for example, those who profess the artistic temperament and follow the impulse of the moment, and those who consult an inner light in some entirely mystical manner. But neither of these I believe is the most abundant type in the English-speaking communities.