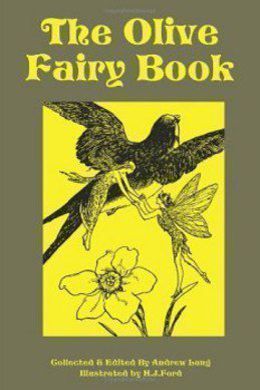 The Olive Fairy Book contains eight Punjabi tales, five from Armenia, 16 other stories from Turkey, Denmark, the Sudan, and more. An enchanting world of flying dragons, ogres, fairies, and princes transformed into white foxes with illustrations by H.J. Ford.

Once upon a time there lived, in a small cottage among some hills, a woman with her son, and, to her great grief, the young man, though hardly more than twenty years of age, had not as much hair on his head as a baby. But, old as he looked, the youth was very idle, and whatever trade his mother put him to he refused to work, and in a few days always came home again.

On a fine summer morning he was lying as usual half asleep in the little garden in front of the cottage when the sultan’s daughter came riding by, followed by a number of gaily dressed ladies. The youth lazily raised himself on his elbow to look at her, and that one glance changed his whole nature.

‘I will marry her and nobody else,’ he thought. And jumping up, he went to find his mother.

‘You must go at once to the sultan, and tell him that I want his daughter for my wife,’ he said.

‘WHAT?’ shouted the old woman, shrinking back into a corner, for nothing but sudden madness could explain such an amazing errand.

‘Don’t you understand? You must go at once to the sultan and tell him that I want his daughter for my wife,’ repeated the youth impatiently.

‘But—but, do you know what you are saying?’ stammered the mother. ‘You will learn no trade, and have only the five gold pieces left you by your father, and can you really expect that the sultan would give his daughter to a penniless bald–pate like you?’

‘That is my affair; do as I bid you.’ And neither day nor night did her son cease tormenting her, till, in despair, she put on her best clothes, and wrapped her veil about her, and went over the hill to the palace.

It was the day that the sultan set apart for hearing the complaints and petitions of his people, so the woman found no difficulty in gaining admission to his presence.

‘Do not think me mad, O Excellency,’ she began, ‘though I know I must seem like it. But I have a son who, since his eyes have rested on the veiled face of the princess, has not left me in peace day or night till I consented to come to the palace, and to ask your Excellency for your daughter’s hand. It was in vain I answered that my head might pay the forfeit of my boldness, he would listen to nothing. Therefore am I here; do with me even as you will!’

Now the sultan always loved anything out of the common, and this situation was new indeed. So, instead of ordering the trembling creature to be flogged or cast into prison, as some other sovereigns might have done, he merely said: ‘Bid your son come hither.’

The old woman stared in astonishment at such a reply. But when the sultan repeated his words even more gently than before, and did not look in anywise angered, she took courage, and bowing again she hastened homeward.

‘Well, how have you sped?’ asked her son eagerly as she crossed the threshold.

‘You are to go up to the palace without delay, and speak to the sultan himself,’ replied the mother. And when he heard the good news, his face lightened up so wonderfully that his mother thought what a pity it was that he had no hair, as then he would be quite handsome.

‘Ah, the lightning will not fly more swiftly,’ cried he. And in another instant he was out of her sight.

When the sultan beheld the bald head of his daughter’s wooer, he no longer felt in the mood for joking, and resolved that he must somehow or other shake himself free of such an unwelcome lover. But as he had summoned the young man to the palace, he could hardly dismiss him without a reason, so he hastily said:

‘I hear you wish to marry my daughter? Well and good. But the man who is to be her husband must first collect all the birds in the world, and bring them into the gardens of the palace; for hitherto no birds have made their homes in the trees.’

The young man was filled with despair at the sultan’s words. How was he to snare all these birds? and even if he did succeed in catching them it would take years to carry them to the palace! Still, he was too proud to let the sultan think that he had given up the princess without a struggle, so he took a road that led past the palace and walked on, not noticing whither he went.

In this manner a week slipped by, and at length he found himself crossing a desert with great rocks scattered here and there. In the shadow cast by one of these was seated a holy man or dervish, as he was called, who motioned to the youth to sit beside him.

‘Something is troubling you, my son,’ said the holy man; ‘tell me what it is, as I may be able to help you.’

‘O, my father,’ answered the youth, ‘I wish to marry the princess of my country; but the sultan refuses to give her to me unless I can collect all the birds in the world and bring them into his garden. And how can I, or any other man, do that?’