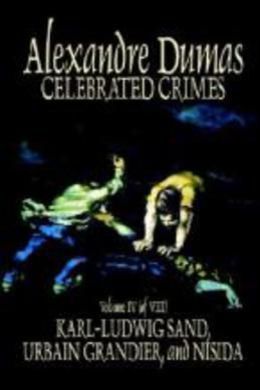 Learn about some of the most infamous criminals from around Europe in this massive compilation from one of the foremost writers of historical fiction, Alexandre Dumas. In often-chilling detail, Dumas recounts murders, heists, and all manner of malfeasance from centuries of European history. This collection of 18 essays is based upon historical facts of famous criminals and the crimes they committed. Contents: The Borgias, The Cenci, Massacres Of The South, Mary Stuart, Karl-Ludwig Sand, Urbain Grandier, Nisida, Derues, La Constantin, Joan Of Naples, The Man In The Iron Mask (essay), Martin Guerre, Ali Pacha, The Countess De Saint Geran, Murat, The Marquise De Brinvilliers, Vaninka, and The Marquise De Ganges.

Towards the end of the fifteenth century—that is to say, at the epoch when our history opens the Piazza of St. Peter’s at Rome was far from presenting so noble an aspect as that which is offered in our own day to anyone who approaches it by the Piazza dei Rusticucci.

In fact, the Basilica of Constantine existed no longer, while that of Michael Angelo, the masterpiece of thirty popes, which cost the labour of three centuries and the expense of two hundred and sixty millions, existed not yet. The ancient edifice, which had lasted for eleven hundred and forty-five years, had been threatening to fall in about 1440, and Nicholas V, artistic forerunner of Julius II and Leo X, had had it pulled down, together with the temple of Probus Anicius which adjoined it. In their place he had had the foundations of a new temple laid by the architects Rossellini and Battista Alberti; but some years later, after the death of Nicholas V, Paul II, the Venetian, had not been able to give more than five thousand crowns to continue the project of his predecessor, and thus the building was arrested when it had scarcely risen above the ground, and presented the appearance of a still-born edifice, even sadder than that of a ruin.

As to the piazza itself, it had not yet, as the reader will understand from the foregoing explanation, either the fine colonnade of Bernini, or the dancing fountains, or that Egyptian obelisk which, according to Pliny, was set up by the Pharaoh at Heliopolis, and transferred to Rome by Caligula, who set it up in Nero’s Circus, where it remained till 1586. Now, as Nero’s Circus was situate on the very ground where St. Peter’s now stands, and the base of this obelisk covered the actual site where the vestry now is, it looked like a gigantic needle shooting up from the middle of truncated columns, walls of unequal height, and half-carved stones.

On the right of this building, a ruin from its cradle, arose the Vatican, a splendid Tower of Babel, to which all the celebrated architects of the Roman school contributed their work for a thousand years: at this epoch the two magnificent chapels did not exist, nor the twelve great halls, the two-and-twenty courts, the thirty staircases, and the two thousand bedchambers; for Pope Sixtus V, the sublime swineherd, who did so many things in a five years’ reign, had not yet been able to add the immense building which on the eastern side towers above the court of St. Damasius; still, it was truly the old sacred edifice, with its venerable associations, in which Charlemagne received hospitality when he was crowned emperor by Pope Leo III.

All the same, on the 9th of August, 1492, the whole of Rome, from the People’s Gate to the Coliseum and from the Baths of Diocletian to the castle of Sant’ Angelo, seemed to have made an appointment on this piazza: the multitude thronging it was so great as to overflow into all the neighbouring streets, which started from this centre like the rays of a star. The crowds of people, looking like a motley moving carpet, were climbing up into the basilica, grouping themselves upon the stones, hanging on the columns, standing up against the walls; they entered by the doors of houses and reappeared at the windows, so numerous and so densely packed that one might have said each window was walled up with heads. Now all this multitude had its eyes fixed on one single point in the Vatican; for in the Vatican was the Conclave, and as Innocent VIII had been dead for sixteen days, the Conclave was in the act of electing a pope.

Rome is the town of elections: since her foundation down to our own day—that is to say, in the course of nearly twenty-six centuries—she has constantly elected her kings, consuls, tribunes, emperors, and popes: thus Rome during the days of Conclave appears to be attacked by a strange fever which drives everyone to the Vatican or to Monte Cavallo, according as the scarlet-robed assembly is held in one or the other of these two palaces: it is, in fact, because the raising up of a new pontiff is a great event far everybody; for, according to the average established in the period between St. Peter and Gregory XVI, every pope lasts about eight years, and these eight years, according to the character of the man who is elected, are a period either of tranquillity or of disorder, of justice or of venality, of peace or of war.

Never perhaps since the day when the first successor of St. Peter took his seat on the, pontifical throne until the interregnum which now occurred, had so great an agitation been shown as there was at this moment, when, as we have shown, all these people were thronging on the Piazza of St. Peter and in the streets which led to it.