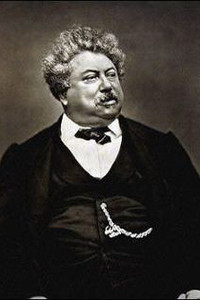 Alexandre Dumas (Père) was a French writer, best known for his numerous historical novels of high adventure which have made him one of the most widely read French authors in the world. Many of his novels, including The Count of Monte Cristo, The Three Musketeers, and The Man in the Iron Mask were serialized, and he also wrote plays and magazine articles and was a prolific correspondent. In 1829 his first solo play, Henry III and his Court, was produced, meeting with great public acclaim and after writing many successful plays, he turned his efforts to novels.

Dumas made extensive use of the aid of numerous ghost-writers of which Auguste Maquet was the best known. It was Maquet who outlined the plot of The Count of Monte Cristo and made substantial contributions to The Three Musketeers and its sequels, as well as several other novels. When working together, Maquet proposed plots and wrote drafts, while Dumas added the details, dialogues, and the final chapters.

Despite his success and aristocratic connections, being of mixed-blood would affect him all his life. In 1843, he wrote a short novel, Georges, which addressed some of the issues of race and the effects of colonialism. Nevertheless, racist attitudes impacted his rightful position in France’s history long after his death in 1870. (source: Wikipedia)

Learn about some of the most infamous criminals from around Europe in this massive compilation from one of the foremost writers of historical fiction, A...read more »

Louise de la Valliere is the middle section of The Vicomte de Bragelonne or, Ten Years After. Against a tender love story, Dumas continues the suspense ...read more »

Dumas manages to jam enough action and storyline into the novel to make it worth the read. Despite being a weaker work in Dumas’ bibliography, it displa...read more »

Edmond Dantes, a nineteen-year-old sailor from Marseilles, is soon to be captain of his own ship and to marry his beloved, the beautiful Mercedes. But s...read more »

Deep inside the dreaded Bastille, a twenty-three-year-old prisoner called merely “Philippe” has languished for eight long, dark years. He does not know ...read more »

“All for one and one for all!”The young and headstrong D’Artagnan, having proven his bravery by dueling with each, becomes a friend of Athos, Porthos, a...read more »

It is now 1660, and although promised the captaincy of the musketeers at the close of Twenty Years After, D’Artagnan is still trailing his sword in the ...read more »

Two decades have passed since the famous swordsmen triumphed over Cardinal Richelieu and Milady in The Three Musketeers. Time has weakened their resolve...read more »