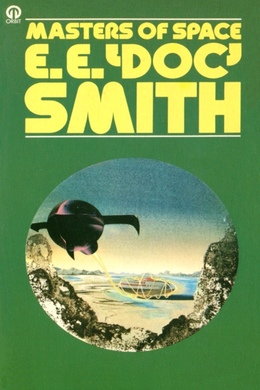 Jarvis Hilton is in charge of a handpicked team of scientists – and a navy warship on a deep space mission, dubbed Project Theta Orionis. On the outbound journey, automatic sensors drop their ship – the Perseus – into normal space for an encounter with a mysterious skeletal object. The encounter leaves them baffled, and leads them to a view an epic space battle. But strange as that is, it’s nowhere near as mysterious as finding a planet covered in radioactive fuel ore – and populated with humanoid robots who have been expecting their arrival and greet them as returning masters…!

“But didn’t you feel anything, Javo?” Strain was apparent in every line of Tula’s taut, bare body. “Nothing at all?”

“Nothing whatever.” The one called Javo relaxed from his rigid concentration. “Nothing has changed. Nor will it.”

“That conclusion is indefensible!” Tula snapped. “With the promised return of the Masters there must and will be changes. Didn’t any of you feel anything?”

Her hot, demanding eyes swept the group; a group whose like, except for physical perfection, could be found in any nudist colony.

No one except Tula had felt a thing.

“That fact is not too surprising,” Javo said finally. “You have the most sensitive receptors of us all. But are you sure?”

“I am sure. It was the thought-form of a living Master.”

“Do you think that the Master perceived your web?”

“It is certain. Those who built us are stronger than we.”

“That is true. As they promised, then, so long and long ago, our Masters are returning home to us.”

Jarvis Hilton of Terra, the youngest man yet to be assigned to direct any such tremendous deep-space undertaking as Project Theta Orionis, sat in conference with his two seconds-in-command. Assistant Director Sandra Cummings, analyst-synthesist and semantician, was tall, blonde and svelte. Planetographer William Karns–a black-haired, black-browed, black-eyed man of thirty–was third in rank of the scientific group.

“I’m telling you, Jarve, you can’t have it both ways,” Karns declared. “Captain Sawtelle is old-school Navy brass. He goes strictly by the book. So you’ve got to draw a razor-sharp line; exactly where the Advisory Board’s directive puts it. And next time he sticks his ugly puss across that line, kick his face in. You’ve been Caspar Milquetoast Two ever since we left Base.”

“That’s the way it looks to you?” Hilton’s right hand became a fist. “The man has age, experience and ability. I’ve been trying to meet him on a ground of courtesy and decency.”

“Exactly. And he doesn’t recognize the existence of either. And, since the Board rammed you down his throat instead of giving him old Jeffers, you needn’t expect him to.”

“You may be right, Bill. What do you think, Dr. Cummings?”

The girl said: “Bill’s right. Also, your constant appeasement isn’t doing the morale of the whole scientific group a bit of good.”

“Well, I haven’t enjoyed it, either. So next time I’ll pin his ears back. Anything else?”

“Yes, Dr. Hilton, I have a squawk of my own. I know I was rammed down your throat, but just when are you going to let me do some work?”

“None of us has much of anything to do yet, and won’t have until we light somewhere. You’re off base a country mile.”

“I’m not off base. You did want Eggleston, not me.”

“Sure I did. I’ve worked with him and know what he can do. But I’m not holding a grudge about it.”

“No? Why, then, are you on first-name terms with everyone in the scientific group except me? Supposedly your first assistant?”

“That’s easy!” Hilton snapped. “Because you’ve been carrying chips on both shoulders ever since you came aboard … or at least I thought you were.” Hilton grinned suddenly and held out his hand. “Sorry, Sandy–I’ll start all over again.”

“I’m sorry too, Chief.” They shook hands warmly. “I was pretty stiff, I guess, but I’ll be good.”

“You’ll go to work right now, too. As semantician. Dig out that directive and tear it down. Draw that line Bill talked about.”

“Can do, boss.” She swung to her feet and walked out of the room, her every movement one of lithe and easy grace.

Karns followed her with his eyes. “Funny. A trained-dancer Ph.D. And a Miss America type, like all the other women aboard this spacer. I wonder if she’ll make out.”

“So do I. I still wish they’d given me Eggy. I’ve never seen an executive-type female Ph.D. yet that was worth the cyanide it would take to poison her.”

“That’s what Sawtelle thinks of you, too, you know.”

“I know; and the Board does know its stuff. So I’m really hoping, Bill, that she surprises me as much as I intend to surprise the Navy.”

Alarm bells clanged as the mighty Perseus blinked out of overdrive. Every crewman sprang to his post.

“Mister Snowden, why did we emerge without orders from me?” Captain Sawtelle bellowed, storming into the control room three jumps behind Hilton.

“Automatics! I give the orders!”

“In this case, Captain Sawtelle, you don’t,” Hilton said. Eyes locked and held. To Sawtelle, this was a new and strange co-commander. “I would suggest that we discuss this matter in private.”

“Very well, sir,” Sawtelle said; and in the captain’s cabin Hilton opened up.