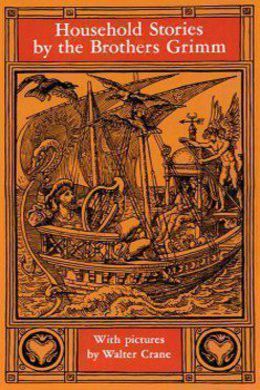 Included here are fairy tales from “Children’s and Household Tales” by the Brothers Grimm, translated by Margaret Hunt. The translation is based on the last edition of the book, featuring 200 fairy tales and 10 children’s legends and includes such firm favourites as Rapunzel, The Goose Girl, Sleeping Beauty, Hansel and Gretel and Snow White. The Brothers Grimm rediscovered a host of fairy tales, telling of princes and princesses in their castles, witches in their towers and forests, of giants and dwarfs, of fabulous animals and dark deeds.

In old times when wishing still helped one, there lived a king whose daughters were all beautiful, but the youngest was so beautiful that the sun itself, which has seen so much, was astonished whenever it shone in her face. Close by the King’s castle lay a great dark forest, and under an old lime-tree in the forest was a well, and when the day was very warm, the King’s child went out into the forest and sat down by the side of the cool fountain, and when she was dull she took a golden ball, and threw it up on high and caught it, and this ball was her favorite plaything.

Now it so happened that on one occasion the princess’s golden ball did not fall into the little hand which she was holding up for it, but on to the ground beyond, and rolled straight into the water. The King’s daughter followed it with her eyes, but it vanished, and the well was deep, so deep that the bottom could not be seen. On this she began to cry, and cried louder and louder, and could not be comforted. And as she thus lamented some one said to her, “What ails thee, King’s daughter? Thou weepest so that even a stone would show pity.” She looked round to the side from whence the voice came, and saw a frog stretching forth its thick, ugly head from the water. “Ah! old water-splasher, is it thou?” said she; “I am weeping for my golden ball, which has fallen into the well.”

“Be quiet, and do not weep,” answered the frog, “I can help thee, but what wilt thou give me if I bring thy plaything up again?” “Whatever thou wilt have, dear frog,” said she–“My clothes, my pearls and jewels, and even the golden crown which I am wearing.”

The frog answered, “I do not care for thy clothes, thy pearls and jewels, or thy golden crown, but if thou wilt love me and let me be thy companion and play-fellow, and sit by thee at thy little table, and eat off thy little golden plate, and drink out of thy little cup, and sleep in thy little bed—if thou wilt promise me this I will go down below, and bring thee thy golden ball up again.”

“Oh yes,” said she, “I promise thee all thou wishest, if thou wilt but bring me my ball back again.” She, however, thought, “How the silly frog does talk! He lives in the water with the other frogs, and croaks, and can be no companion to any human being!”

But the frog when he had received this promise, put his head into the water and sank down, and in a short while came swimmming up again with the ball in his mouth, and threw it on the grass. The King’s daughter was delighted to see her pretty plaything once more, and picked it up, and ran away with it. “Wait, wait,” said the frog. “Take me with thee. I can’t run as thou canst.” But what did it avail him to scream his croak, croak, after her, as loudly as he could? She did not listen to it, but ran home and soon forgot the poor frog, who was forced to go back into his well again.

The next day when she had seated herself at table with the King and all the courtiers, and was eating from her little golden plate, something came creeping splish splash, splish splash, up the marble staircase, and when it had got to the top, it knocked at the door and cried, “Princess, youngest princess, open the door for me.” She ran to see who was outside, but when she opened the door, there sat the frog in front of it. Then she slammed the door to, in great haste, sat down to dinner again, and was quite frightened. The King saw plainly that her heart was beating violently, and said, “My child, what art thou so afraid of? Is there perchance a giant outside who wants to carry thee away?” “Ah, no,” replied she. “It is no giant but a disgusting frog.”

“What does a frog want with thee?” “Ah, dear father, yesterday as I was in the forest sitting by the well, playing, my golden ball fell into the water. And because I cried so, the frog brought it out again for me, and because he so insisted, I promised him he should be my companion, but I never thought he would be able to come out of his water! And now he is outside there, and wants to come in to me.”