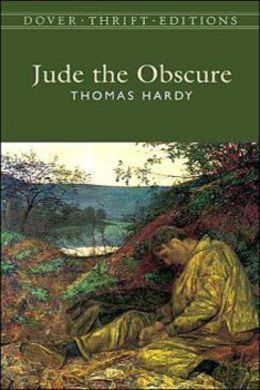 Often thought of as Thomas Hardy’s best work, not only for the elaborate structure of the plot, where small and subtle details lead to the character’s ruin, but in the themes that range from how human loneliness and sensuality can stop a person from trying to fulfill his dreams; to how, when free from the trap of marriage, one’s dreams will not be fulfilled if one is of a lower status; how the educated classes are often more like sophists than intellectuals; how living a libertine life full of integrity and passion will be condemned as scandalous in conservative society; and how religion is nothing but a mistaken sense that the tragedies that wear down an individual are the result of having sinned against a higher being.

The schoolmaster was leaving the village, and everybody seemed sorry. The miller at Cresscombe lent him the small white tilted cart and horse to carry his goods to the city of his destination, about twenty miles off, such a vehicle proving of quite sufficient size for the departing teacher’s effects. For the schoolhouse had been partly furnished by the managers, and the only cumbersome article possessed by the master, in addition to the packing-case of books, was a cottage piano that he had bought at an auction during the year in which he thought of learning instrumental music. But the enthusiasm having waned he had never acquired any skill in playing, and the purchased article had been a perpetual trouble to him ever since in moving house.

The rector had gone away for the day, being a man who disliked the sight of changes. He did not mean to return till the evening, when the new school-teacher would have arrived and settled in, and everything would be smooth again.

The blacksmith, the farm bailiff, and the schoolmaster himself were standing in perplexed attitudes in the parlour before the instrument. The master had remarked that even if he got it into the cart he should not know what to do with it on his arrival at Christminster, the city he was bound for, since he was only going into temporary lodgings just at first.

A little boy of eleven, who had been thoughtfully assisting in the packing, joined the group of men, and as they rubbed their chins he spoke up, blushing at the sound of his own voice: “Aunt have got a great fuel-house, and it could be put there, perhaps, till you’ve found a place to settle in, sir.”

It was decided that a deputation should wait on the boy’s aunt–an old maiden resident–and ask her if she would house the piano till Mr. Phillotson should send for it. The smith and the bailiff started to see about the practicability of the suggested shelter, and the boy and the schoolmaster were left standing alone.

“Sorry I am going, Jude?” asked the latter kindly.

Tears rose into the boy’s eyes, for he was not among the regular day scholars, who came unromantically close to the schoolmaster’s life, but one who had attended the night school only during the present teacher’s term of office. The regular scholars, if the truth must be told, stood at the present moment afar off, like certain historic disciples, indisposed to any enthusiastic volunteering of aid.

The boy awkwardly opened the book he held in his hand, which Mr. Phillotson had bestowed on him as a parting gift, and admitted that he was sorry.

“Ah–that would be a long story. You wouldn’t understand my reasons, Jude. You will, perhaps, when you are older.”

“Well–don’t speak of this everywhere. You know what a university is, and a university degree? It is the necessary hallmark of a man who wants to do anything in teaching. My scheme, or dream, is to be a university graduate, and then to be ordained. By going to live at Christminster, or near it, I shall be at headquarters, so to speak, and if my scheme is practicable at all, I consider that being on the spot will afford me a better chance of carrying it out than I should have elsewhere.”

The smith and his companion returned. Old Miss Fawley’s fuel-house was dry, and eminently practicable; and she seemed willing to give the instrument standing-room there. It was accordingly left in the school till the evening, when more hands would be available for removing it; and the schoolmaster gave a final glance round.

The boy Jude assisted in loading some small articles, and at nine o’clock Mr. Phillotson mounted beside his box of books and other impedimenta, and bade his friends good-bye.

“I shan’t forget you, Jude,” he said, smiling, as the cart moved off. “Be a good boy, remember; and be kind to animals and birds, and read all you can. And if ever you come to Christminster remember you hunt me out for old acquaintance’ sake.”

The cart creaked across the green, and disappeared round the corner by the rectory-house. The boy returned to the draw-well at the edge of the greensward, where he had left his buckets when he went to help his patron and teacher in the loading. There was a quiver in his lip now and after opening the well-cover to begin lowering the bucket he paused and leant with his forehead and arms against the framework, his face wearing the fixity of a thoughtful child’s who has felt the pricks of life somewhat before his time. The well into which he was looking was as ancient as the village itself, and from his present position appeared as a long circular perspective ending in a shining disk of quivering water at a distance of a hundred feet down.