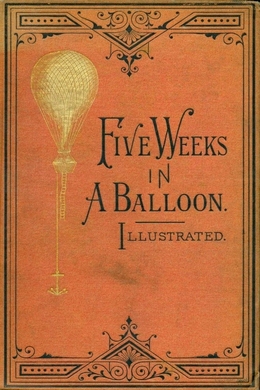 Five Weeks in a Balloon

Journeys and Discoveries in Africa by Three Englishmen

The first Verne novel in which he perfected the “ingredients” of his later work, skilfully mixing a plot full of adventure and twists that hold the reader’s interest with passages of technical, geographic, and historic description. The book gives readers a glimpse of the exploration of Africa, which was still not completely known to Europeans of the time, with explorers travelling all over the continent in search of its secrets. Public interest in fanciful tales of African exploration was at its height, and the book was an instant hit; it made Verne financially independent and got him a contract with Jules Hetzel’s publishing house, which put out several dozen more works of his for over forty years afterwards.

There was a large audience assembled on the 14th of January, 1862, at the session of the Royal Geographical Society, No. 3 Waterloo Place, London. The president, Sir Francis M—-, made an important communication to his colleagues, in an address that was frequently interrupted by applause.

This rare specimen of eloquence terminated with the following sonorous phrases bubbling over with patriotism:

“England has always marched at the head of nations” (for, the reader will observe, the nations always march at the head of each other), “by the intrepidity of her explorers in the line of geographical discovery.” (General assent). “Dr. Samuel Ferguson, one of her most glorious sons, will not reflect discredit on his origin.” (“No, indeed!” from all parts of the hall.)

“This attempt, should it succeed” (“It will succeed!”), “will complete and link together the notions, as yet disjointed, which the world entertains of African cartology” (vehement applause); “and, should it fail, it will, at least, remain on record as one of the most daring conceptions of human genius!” (Tremendous cheering.)

“Huzza for the intrepid Ferguson!” cried one of the most excitable of the enthusiastic crowd.

The wildest cheering resounded on all sides; the name of Ferguson was in every mouth, and we may safely believe that it lost nothing in passing through English throats. Indeed, the hall fairly shook with it.

And there were present, also, those fearless travellers and explorers whose energetic temperaments had borne them through every quarter of the globe, many of them grown old and worn out in the service of science. All had, in some degree, physically or morally, undergone the sorest trials. They had escaped shipwreck; conflagration; Indian tomahawks and war-clubs; the fagot and the stake; nay, even the cannibal maws of the South Sea Islanders. But still their hearts beat high during Sir Francis M—-‘s address, which certainly was the finest oratorical success that the Royal Geographical Society of London had yet achieved.

But, in England, enthusiasm does not stop short with mere words. It strikes off money faster than the dies of the Royal Mint itself. So a subscription to encourage Dr. Ferguson was voted there and then, and it at once attained the handsome amount of two thousand five hundred pounds. The sum was made commensurate with the importance of the enterprise.

A member of the Society then inquired of the president whether Dr. Ferguson was not to be officially introduced.

“The doctor is at the disposition of the meeting,” replied Sir Francis.

“Let him come in, then! Bring him in!” shouted the audience. “We’d like to see a man of such extraordinary daring, face to face!”

“Perhaps this incredible proposition of his is only intended to mystify us,” growled an apoplectic old admiral.

“Suppose that there should turn out to be no such person as Dr. Ferguson?” exclaimed another voice, with a malicious twang.

“Why, then, we’d have to invent one!” replied a facetious member of this grave Society.

“Ask Dr. Ferguson to come in,” was the quiet remark of Sir Francis M—-.

And come in the doctor did, and stood there, quite unmoved by the thunders of applause that greeted his appearance.

He was a man of about forty years of age, of medium height and physique. His sanguine temperament was disclosed in the deep color of his cheeks. His countenance was coldly expressive, with regular features, and a large nose–one of those noses that resemble the prow of a ship, and stamp the faces of men predestined to accomplish great discoveries. His eyes, which were gentle and intelligent, rather than bold, lent a peculiar charm to his physiognomy. His arms were long, and his feet were planted with that solidity which indicates a great pedestrian.

A calm gravity seemed to surround the doctor’s entire person, and no one would dream that he could become the agent of any mystification, however harmless.

Hence, the applause that greeted him at the outset continued until he, with a friendly gesture, claimed silence on his own behalf. He stepped toward the seat that had been prepared for him on his presentation, and then, standing erect and motionless, he, with a determined glance, pointed his right forefinger upward, and pronounced aloud the single word–

Never had one of Bright’s or Cobden’s sudden onslaughts, never had one of Palmerston’s abrupt demands for funds to plate the rocks of the English coast with iron, made such a sensation. Sir Francis M—-‘s address was completely overshadowed. The doctor had shown himself moderate, sublime, and self-contained, in one; he had uttered the word of the situation–