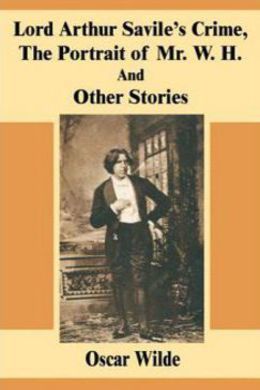 The Portrait of Mr. W.H. and Other Stories

Lord Arthur Savile, about to be married to a sweetly innocent maiden, learns to his horror that a psychic can see a crime of violence in his palm. The clairvoyant tells Saville that before he can marry his beloved, he must murder a distant relative. What follows is a hilarious account of Lord Saville’s various failed attempts through poison , explosives and more to do the terrible deed. After the last frustrating attempt he decides he rather murder the psychic instead!

It was Lady Windermere’s last reception before Easter, and Bentinck House was even more crowded than usual. Six Cabinet Ministers had come on from the Speaker’s Levee in their stars and ribands, all the pretty women wore their smartest dresses, and at the end of the picture–gallery stood the Princess Sophia of Carlsruhe, a heavy Tartar–looking lady, with tiny black eyes and wonderful emeralds, talking bad French at the top of her voice, and laughing immoderately at everything that was said to her. It was certainly a wonderful medley of people. Gorgeous peeresses chatted affably to violent Radicals, popular preachers brushed coat–tails with eminent sceptics, a perfect bevy of bishops kept following a stout prima–donna from room to room, on the staircase stood several Royal Academicians, disguised as artists, and it was said that at one time the supper–room was absolutely crammed with geniuses. In fact, it was one of Lady Windermere’s best nights, and the Princess stayed till nearly half–past eleven.

As soon as she had gone, Lady Windermere returned to the picture–gallery, where a celebrated political economist was solemnly explaining the scientific theory of music to an indignant virtuoso from Hungary, and began to talk to the Duchess of Paisley. She looked wonderfully beautiful with her grand ivory throat, her large blue forget–me–not eyes, and her heavy coils of golden hair. Or pur they were—not that pale straw colour that nowadays usurps the gracious name of gold, but such gold as is woven into sunbeams or hidden in strange amber; and they gave to her face something of the frame of a saint, with not a little of the fascination of a sinner. She was a curious psychological study. Early in life she had discovered the important truth that nothing looks so like innocence as an indiscretion; and by a series of reckless escapades, half of them quite harmless, she had acquired all the privileges of a personality. She had more than once changed her husband; indeed, Debrett credits her with three marriages; but as she had never changed her lover, the world had long ago ceased to talk scandal about her. She was now forty years of age, childless, and with that inordinate passion for pleasure which is the secret of remaining young.

Suddenly she looked eagerly round the room, and said, in her clear contralto voice, ‘Where is my cheiromantist?’