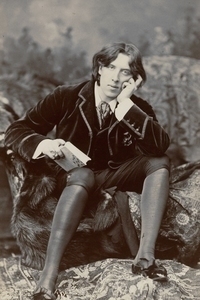 Oscar Fingal O’Flahertie Wills Wilde was an Irish writer, poet and prominent aesthete. His parents were successful Dublin intellectuals, and from an early age he showed his intelligence, becoming fluent in French and German, then an outstanding classicist, first at Dublin, then at Oxford. After university, Wilde moved around trying his hand at various literary activities: he published a book of poems, then toured America lecturing extensively on aestheticism. Returning to London he worked prolifically as a journalist for four years. Known for his biting wit, flamboyant dress, and glittering conversation, Wilde had become one of the most well-known personalities of his day. He produced a series of dialogues and essays that developed his ideas about the supremacy of art. However, it was his only novel, The Picture of Dorian Gray - still widely read - that brought him more lasting recognition. He became one of the most successful playwrights of the late Victorian era in London with a series of social satires which continue to be performed, especially his masterpiece The Importance of Being Earnest.

A House of Pomegranates is a collection of whimisical short stories by Oscar Wilde. This collections includes the following tales: The Young King, The B...read more »

Wilde’s scintillating drawing-room comedy revolves around a blackmail scheme that forces a married couple to reexamine their moral standards. A supporti...read more »

Wilde’s audacious drama of social scandal centres around the revelation of Mrs Arbuthnot’s long-concealed secret. A house party is in full swing at Lady...read more »

Centering around the arrival of a mysterious woman hoping to break into London’s society, this was Wilde’s first great stage success. Lady Windermere le...read more »

Lord Arthur Savile, about to be married to a sweetly innocent maiden, learns to his horror that a psychic can see a crime of violence in his palm. The c...read more »

This beautiful and remarkable little wonder of a book includes “The Happy Prince,” “The Nightingale and the Rose,” “The Selfish Giant,” “The Devoted Fri...read more »

The Importance of Being Earnest (1895)

The Importance of Being Earnest is a comedy of manners set in Victorian England. Algernon lives in London and says he has a sick friend in the country. ...read more »

When first published this unique novel evoked a tremendous amount of hostile criticism, in most part due to its immoral content. Oscar Wilde was identif...read more »