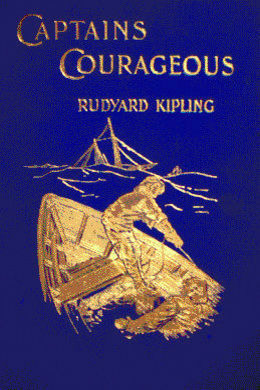 Harvey Cheyne, spoiled millionaire’s son, tumbles overboard from a luxury liner–only to be rescued by the crew of a Gloucester schooner. Thus begins the boy’s second voyage into the rugged rites and ways of sailors. Like all Kipling’s masterworks, Captains Courageous is an interweaving of art and moral purpose. Angus Wilson has said that it shows “delicacy of craft and violence of feeling, exactitude and wile impressionism, subtlety and true innocence.” A popular favourite since its first publication, the novel remains a classic story of youthful initiation–and a lively tribute to the author’s famous code of bravery, loyalty, an honour among men.

The weather door of the smoking-room had been left open to the North Atlantic fog, as the big liner rolled and lifted, whistling to warn the fishing-fleet.

“That Cheyne boy’s the biggest nuisance aboard,” said a man in a frieze overcoat, shutting the door with a bang. “He isn’t wanted here. He’s too fresh.”

A white-haired German reached for a sandwich, and grunted between bites: “I know der breed. Ameriga is full of dot kind. I dell you you should imbort ropes’ ends free under your dariff.”

“Pshaw! There isn’t any real harm to him. He’s more to be pitied than anything,” a man from New York drawled, as he lay at full length along the cushions under the wet skylight. “They’ve dragged him around from hotel to hotel ever since he was a kid. I was talking to his mother this morning. She’s a lovely lady, but she don’t pretend to manage him. He’s going to Europe to finish his education.”

“Education isn’t begun yet.” This was a Philadelphian, curled up in a corner. “That boy gets two hundred a month pocket-money, he told me. He isn’t sixteen either.”

“Railroads, his father, aind’t it?” said the German.

“Yep. That and mines and lumber and shipping. Built one place at San Diego, the old man has; another at Los Angeles; owns half a dozen railroads, half the lumber on the Pacific slope, and lets his wife spend the money,” the Philadelphian went on lazily. “The West don’t suit her, she says. She just tracks around with the boy and her nerves, trying to find out what’ll amuse him, I guess. Florida, Adirondacks, Lakewood, Hot Springs, New York, and round again. He isn’t much more than a second-hand hotel clerk now. When he’s finished in Europe he’ll be a holy terror.”

“What’s the matter with the old man attending to him personally?” said a voice from the frieze ulster.

“Old man’s piling up the rocks. ‘Don’t want to be disturbed, I guess. He’ll find out his error a few years from now. ‘Pity, because there’s a heap of good in the boy if you could get at it.”

Once more the door banged, and a slight, slim-built boy perhaps fifteen years old, a half-smoked cigarette hanging from one corner of his mouth, leaned in over the high footway. His pasty yellow complexion did not show well on a person of his years, and his look was a mixture of irresolution, bravado, and very cheap smartness. He was dressed in a cherry-coloured blazer, knickerbockers, red stockings, and bicycle shoes, with a red flannel cap at the back of the head. After whistling between his teeth, as he eyed the company, he said in a loud, high voice: “Say, it’s thick outside. You can hear the fish-boats squawking all around us. Say, wouldn’t it be great if we ran down one?”

“Who’ll stop me?” he answered, deliberately. “Did you pay for my passage, Mister Martin? ‘Guess I’ve as good right here as the next man.”

He picked up some dice from a checkerboard and began throwing, right hand against left.

“Say, gen’elmen, this is deader’n mud. Can’t we make a game of poker between us?”

There was no answer, and he puffed his cigarette, swung his legs, and drummed on the table with rather dirty fingers. Then he pulled out a roll of bills as if to count them.

“How’s your mamma this afternoon?” a man said. “I didn’t see her at lunch.”

“In her state-room, I guess. She’s ‘most always sick on the ocean. I’m going to give the stewardess fifteen dollars for looking after her. I don’t go down more ‘n I can avoid. It makes me feel mysterious to pass that butler’s-pantry place. Say, this is the first time I’ve been on the ocean.”

“Who’s apologizing? This is the first time I’ve crossed the ocean, gen’elmen, and, except the first day, I haven’t been sick one little bit. No, sir!” He brought down his fist with a triumphant bang, wetted his finger, and went on counting the bills.

“Oh, you’re a high-grade machine, with the writing in plain sight,” the Philadelphian yawned. “You’ll blossom into a credit to your country if you don’t take care.”

“I know it. I’m an American–first, last, and all the time. I’ll show ‘em that when I strike Europe. Piff! My cig’s out. I can’t smoke the truck the steward sells. Any gen’elman got a real Turkish cig on him?”

The chief engineer entered for a moment, red, smiling, and wet. “Say, Mac,” cried Harvey cheerfully, “how are we hitting it?”

“Vara much in the ordinary way,” was the grave reply. “The young are as polite as ever to their elders, an’ their elders are e’en tryin’ to appreciate it.”

A low chuckle came from a corner. The German opened his cigar-case and handed a skinny black cigar to Harvey.

“Dot is der broper apparatus to smoke, my young friendt,” he said. “You vill dry it? Yes? Den you vill be efer so happy.”