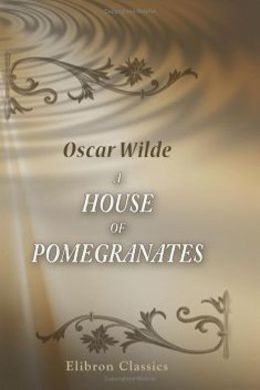 A House of Pomegranates

A House of Pomegranates is a collection of whimisical short stories by Oscar Wilde. This collections includes the following tales: The Young King, The Birthday of the Infanta, The Fisherman and his Soul, and The Star-child. Readers of all ages will be delighted by these fanciful tales.

It was the night before the day fixed for his coronation, and the young King was sitting alone in his beautiful chamber. His courtiers had all taken their leave of him, bowing their heads to the ground, according to the ceremonious usage of the day, and had retired to the Great Hall of the Palace, to receive a few last lessons from the Professor of Etiquette; there being some of them who had still quite natural manners, which in a courtier is, I need hardly say, a very grave offence.

The lad–for he was only a lad, being but sixteen years of age–was not sorry at their departure, and had flung himself back with a deep sigh of relief on the soft cushions of his embroidered couch, lying there, wild-eyed and open-mouthed, like a brown woodland Faun, or some young animal of the forest newly snared by the hunters.

And, indeed, it was the hunters who had found him, coming upon him almost by chance as, bare-limbed and pipe in hand, he was following the flock of the poor goatherd who had brought him up, and whose son he had always fancied himself to be. The child of the old King’s only daughter by a secret marriage with one much beneath her in station–a stranger, some said, who, by the wonderful magic of his lute-playing, had made the young Princess love him; while others spoke of an artist from Rimini, to whom the Princess had shown much, perhaps too much honour, and who had suddenly disappeared from the city, leaving his work in the Cathedral unfinished–he had been, when but a week old, stolen away from his mother’s side, as she slept, and given into the charge of a common peasant and his wife, who were without children of their own, and lived in a remote part of the forest, more than a day’s ride from the town. Grief, or the plague, as the court physician stated, or, as some suggested, a swift Italian poison administered in a cup of spiced wine, slew, within an hour of her wakening, the white girl who had given him birth, and as the trusty messenger who bare the child across his saddle-bow stooped from his weary horse and knocked at the rude door of the goatherd’s hut, the body of the Princess was being lowered into an open grave that had been dug in a deserted churchyard, beyond the city gates, a grave where it was said that another body was also lying, that of a young man of marvellous and foreign beauty, whose hands were tied behind him with a knotted cord, and whose breast was stabbed with many red wounds.

Such, at least, was the story that men whispered to each other. Certain it was that the old King, when on his deathbed, whether moved by remorse for his great sin, or merely desiring that the kingdom should not pass away from his line, had had the lad sent for, and, in the presence of the Council, had acknowledged him as his heir.

And it seems that from the very first moment of his recognition he had shown signs of that strange passion for beauty that was destined to have so great an influence over his life. Those who accompanied him to the suite of rooms set apart for his service, often spoke of the cry of pleasure that broke from his lips when he saw the delicate raiment and rich jewels that had been prepared for him, and of the almost fierce joy with which he flung aside his rough leathern tunic and coarse sheepskin cloak. He missed, indeed, at times the fine freedom of his forest life, and was always apt to chafe at the tedious Court ceremonies that occupied so much of each day, but the wonderful palace–Joyeuse, as they called it–of which he now found himself lord, seemed to him to be a new world fresh-fashioned for his delight; and as soon as he could escape from the council-board or audience-chamber, he would run down the great staircase, with its lions of gilt bronze and its steps of bright porphyry, and wander from room to room, and from corridor to corridor, like one who was seeking to find in beauty an anodyne from pain, a sort of restoration from sickness.

Upon these journeys of discovery, as he would call them–and, indeed, they were to him real voyages through a marvellous land, he would sometimes be accompanied by the slim, fair-haired Court pages, with their floating mantles, and gay fluttering ribands; but more often he would be alone, feeling through a certain quick instinct, which was almost a divination, that the secrets of art are best learned in secret, and that Beauty, like Wisdom, loves the lonely worshipper.

Many curious stories were related about him at this period. It was said that a stout Burgo-master, who had come to deliver a florid oratorical address on behalf of the citizens of the town, had caught sight of him kneeling in real adoration before a great picture that had just been brought from Venice, and that seemed to herald the worship of some new gods.