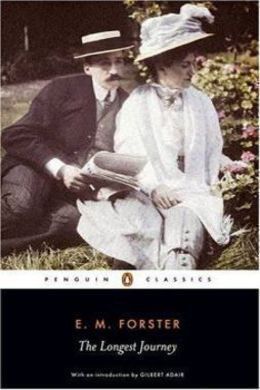 Trilling described The Longest Journey as “perhaps the most brilliant, the most dramatic, and the most passionate” of E.M. Forster’s works. Certainly it’s the most autobiographical – but its form confuses many. Full of sudden death, hopeless love, and quaintly doomed relationships – and yet for all that, it’s an enormously engaging work. It was Forster’s own favourite of his works; he felt that in Stephen he had created a living being.

“The cow is there,” said Ansell, lighting a match and holding it out over the carpet. No one spoke. He waited till the end of the match fell off. Then he said again, “She is there, the cow. There, now.”

“You have not proved it,” said a voice.

“I have proved it to myself.”

“I have proved to myself that she isn’t,” said the voice. “The cow is not there.” Ansell frowned and lit another match.

“She’s there for me,” he declared. “I don’t care whether she’s there for you or not. Whether I’m in Cambridge or Iceland or dead, the cow will be there.”

It was philosophy. They were discussing the existence of objects. Do they exist only when there is some one to look at them? Or have they a real existence of their own? It is all very interesting, but at the same time it is difficult. Hence the cow. She seemed to make things easier. She was so familiar, so solid, that surely the truths that she illustrated would in time become familiar and solid also. Is the cow there or not? This was better than deciding between objectivity and subjectivity. So at Oxford, just at the same time, one was asking, “What do our rooms look like in the vac.?”

“Well, if you go, the cow stops; but if I go, the cow goes. Then what will happen if you stop and I go?”

Several voices cried out that this was quibbling.

“I know it is,” said the speaker brightly, and silence descended again, while they tried honestly to think the matter out.

Rickie, on whose carpet the matches were being dropped, did not like to join in the discussion. It was too difficult for him. He could not even quibble. If he spoke, he should simply make himself a fool. He preferred to listen, and to watch the tobacco-smoke stealing out past the window-seat into the tranquil October air. He could see the court too, and the college cat teasing the college tortoise, and the kitchen-men with supper-trays upon their heads. Hot food for one–that must be for the geographical don, who never came in for Hall; cold food for three, apparently at half-a-crown a head, for some one he did not know; hot food, a la carte–obviously for the ladies haunting the next staircase; cold food for two, at two shillings–going to Ansell’s rooms for himself and Ansell, and as it passed under the lamp he saw that it was meringues again. Then the bedmakers began to arrive, chatting to each other pleasantly, and he could hear Ansell’s bedmaker say, “Oh dang!” when she found she had to lay Ansell’s tablecloth; for there was not a breath stirring. The great elms were motionless, and seemed still in the glory of midsummer, for the darkness hid the yellow blotches on their leaves, and their outlines were still rounded against the tender sky. Those elms were Dryads–so Rickie believed or pretended, and the line between the two is subtler than we admit. At all events they were lady trees, and had for generations fooled the college statutes by their residence in the haunts of youth.

But what about the cow? He returned to her with a start, for this would never do. He also would try to think the matter out. Was she there or not? The cow. There or not. He strained his eyes into the night.

Either way it was attractive. If she was there, other cows were there too. The darkness of Europe was dotted with them, and in the far East their flanks were shining in the rising sun. Great herds of them stood browsing in pastures where no man came nor need ever come, or plashed knee-deep by the brink of impassable rivers. And this, moreover, was the view of Ansell. Yet Tilliard’s view had a good deal in it. One might do worse than follow Tilliard, and suppose the cow not to be there unless oneself was there to see her. A cowless world, then, stretched round him on every side. Yet he had only to peep into a field, and, click! it would at once become radiant with bovine life.

Suddenly he realized that this, again, would never do. As usual, he had missed the whole point, and was overlaying philosophy with gross and senseless details. For if the cow was not there, the world and the fields were not there either. And what would Ansell care about sunlit flanks or impassable streams? Rickie rebuked his own groveling soul, and turned his eyes away from the night, which had led him to such absurd conclusions.

The fire was dancing, and the shadow of Ansell, who stood close up to it, seemed to dominate the little room. He was still talking, or rather jerking, and he was still lighting matches and dropping their ends upon the carpet. Now and then he would make a motion with his feet as if he were running quickly backward upstairs, and would tread on the edge of the fender, so that the fire-irons went flying and the buttered-bun dishes crashed against each other in the hearth.