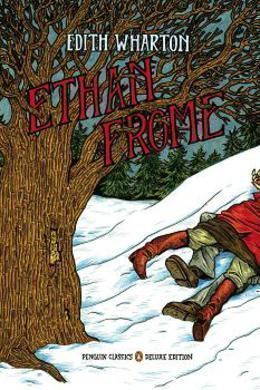 Set against the bleak winter landscape of New England, Ethan Frome is the story of a poor farmer, lonely and downtrodden, his wife Zeena, and her cousin, the enchanting Mattie Silver. In the playing out of this short novel’s powerful and engrossing drama, Edith Wharton constructed her least characteristic and most celebrated book. In her Introduction, the distinguished critic Elaine Showalter discusses the background to the novel’s composition and the reasons for its enduring success.

The village lay under two feet of snow, with drifts at the windy corners. In a sky of iron the points of the Dipper hung like icicles and Orion flashed his cold fires. The moon had set, but the night was so transparent that the white house-fronts between the elms looked gray against the snow, clumps of bushes made black stains on it, and the basement windows of the church sent shafts of yellow light far across the endless undulations.

Young Ethan Frome walked at a quick pace along the deserted street, past the bank and Michael Eady’s new brick store and Lawyer Varnum’s house with the two black Norway spruces at the gate. Opposite the Varnum gate, where the road fell away toward the Corbury valley, the church reared its slim white steeple and narrow peristyle. As the young man walked toward it the upper windows drew a black arcade along the side wall of the building, but from the lower openings, on the side where the ground sloped steeply down to the Corbury road, the light shot its long bars, illuminating many fresh furrows in the track leading to the basement door, and showing, under an adjoining shed, a line of sleighs with heavily blanketed horses.

The night was perfectly still, and the air so dry and pure that it gave little sensation of cold. The effect produced on Frome was rather of a complete absence of atmosphere, as though nothing less tenuous than ether intervened between the white earth under his feet and the metallic dome overhead. “It’s like being in an exhausted receiver,” he thought. Four or five years earlier he had taken a year’s course at a technological college at Worcester, and dabbled in the laboratory with a friendly professor of physics; and the images supplied by that experience still cropped up, at unexpected moments, through the totally different associations of thought in which he had since been living. His father’s death, and the misfortunes following it, had put a premature end to Ethan’s studies; but though they had not gone far enough to be of much practical use they had fed his fancy and made him aware of huge cloudy meanings behind the daily face of things.

As he strode along through the snow the sense of such meanings glowed in his brain and mingled with the bodily flush produced by his sharp tramp. At the end of the village he paused before the darkened front of the church. He stood there a moment, breathing quickly, and looking up and down the street, in which not another figure moved. The pitch of the Corbury road, below lawyer Varnum’s spruces, was the favourite coasting-ground of Starkfield, and on clear evenings the church corner rang till late with the shouts of the coasters; but to-night not a sled darkened the whiteness of the long declivity. The hush of midnight lay on the village, and all its waking life was gathered behind the church windows, from which strains of dance-music flowed with the broad bands of yellow light.

The young man, skirting the side of the building, went down the slope toward the basement door. To keep out of range of the revealing rays from within he made a circuit through the untrodden snow and gradually approached the farther angle of the basement wall. Thence, still hugging the shadow, he edged his way cautiously forward to the nearest window, holding back his straight spare body and craning his neck till he got a glimpse of the room.

Seen thus, from the pure and frosty darkness in which he stood, it seemed to be seething in a mist of heat. The metal reflectors of the gas-jets sent crude waves of light against the whitewashed walls, and the iron flanks of the stove at the end of the hall looked as though they were heaving with volcanic fires. The floor was thronged with girls and young men. Down the side wall facing the window stood a row of kitchen chairs from which the older women had just risen. By this time the music had stopped, and the musicians–a fiddler, and the young lady who played the harmonium on Sundays–were hastily refreshing themselves at one corner of the supper-table which aligned its devastated pie-dishes and ice-cream saucers on the platform at the end of the hall. The guests were preparing to leave, and the tide had already set toward the passage where coats and wraps were hung, when a young man with a sprightly foot and a shock of black hair shot into the middle of the floor and clapped his hands. The signal took instant effect. The musicians hurried to their instruments, the dancers–some already half-muffled for departure–fell into line down each side of the room, the older spectators slipped back to their chairs, and the lively young man, after diving about here and there in the throng, drew forth a girl who had already wound a cherry-coloured “fascinator” about her head, and, leading her up to the end of the floor, whirled her down its length to the bounding tune of a Virginia reel.