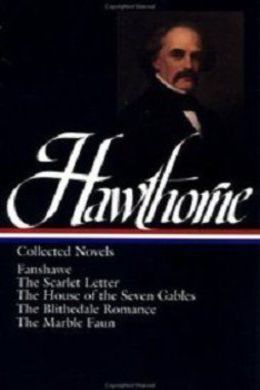 While he had written many short stories before, “Fanshawe” was Nathaniel Hawthorne’s first attempt at writing a novel. The novel is based on his experiences at Bowdoin College in the early 1820s and Hawthorne published the novel himself anonymously in 1828. A commercial failure, Nathaniel Hawthorne’s contempt for his first novel can be seen in his efforts to destroy every copy of it. All unsold copies were burned and later all copies that were sold that could be obtained met the same fate. Twelve years after Hawthorne’s death a copy was discovered and finally republished.

In an ancient though not very populous settlement, in a retired corner of one of the New England States, arise the walls of a seminary of learning, which, for the convenience of a name, shall be entitled “Harley College.” This institution, though the number of its years is inconsiderable compared with the hoar antiquity of its European sisters, is not without some claims to reverence on the score of age; for an almost countless multitude of rivals, by many of which its reputation has been eclipsed, have sprung up since its foundation. At no time, indeed, during an existence of nearly a century, has it acquired a very extensive fame; and circumstances, which need not be particularized, have, of late years, involved it in a deeper obscurity. There are now few candidates for the degrees that the college is authorized to bestow. On two of its annual “Commencement Days,” there has been a total deficiency of baccalaureates; and the lawyers and divines, on whom doctorates in their respective professions are gratuitously inflicted, are not accustomed to consider the distinction as an honor. Yet the sons of this seminary have always maintained their full share of reputation, in whatever paths of life they trod. Few of them, perhaps, have been deep and finished scholars; but the college has supplied–what the emergencies of the country demanded–a set of men more useful in its present state, and whose deficiency in theoretical knowledge has not been found to imply a want of practical ability.

The local situation of the college, so far secluded from the sight and sound of the busy world, is peculiarly favorable to the moral, if not to the literary, habits of its students; and this advantage probably caused the founders to overlook the inconveniences that were inseparably connected with it. The humble edifices rear themselves almost at the farthest extremity of a narrow vale, which, winding through a long extent of hill-country, is wellnigh as inaccessible, except at one point, as the Happy Valley of Abyssinia. A stream, that farther on becomes a considerable river, takes its rise at, a short distance above the college, and affords, along its wood-fringed banks, many shady retreats, where even study is pleasant, and idleness delicious. The neighborhood of the institution is not quite a solitude, though the few habitations scarcely constitute a village. These consist principally of farm-houses, of rather an ancient date (for the settlement is much older than the college), and of a little inn, which even in that secluded spot does not fail of a moderate support. Other dwellings are scattered up and down the valley; but the difficulties of the soil will long avert the evils of a too dense population. The character of the inhabitants does not seem–as there was, perhaps, room to anticipate–to be in any degree influenced by the atmosphere of Harley College. They are a set of rough and hardy yeomen, much inferior, as respects refinement, to the corresponding classes in most other parts of our country. This is the more remarkable, as there is scarcely a family in the vicinity that has not provided, for at least one of its sons, the advantages of a “liberal education.”

Having thus described the present state of Harley College, we must proceed to speak of it as it existed about eighty years since, when its foundation was recent, and its prospects flattering. At the head of the institution, at this period, was a learned and Orthodox divine, whose fame was in all the churches. He was the author of several works which evinced much erudition and depth of research; and the public, perhaps, thought the more highly of his abilities from a singularity in the purposes to which he applied them, that added much to the curiosity of his labors, though little to their usefulness. But, however fanciful might be his private pursuits, Dr. Melmoth, it was universally allowed, was diligent and successful in the arts of instruction. The young men of his charge prospered beneath his eye, and regarded him with an affection that was strengthened by the little foibles which occasionally excited their ridicule. The president was assisted in the discharge of his duties by two inferior officers, chosen from the alumni of the college, who, while they imparted to others the knowledge they had already imbibed, pursued the study of divinity under the direction of their principal. Under such auspices the institution grew and flourished. Having at that time but two rivals in the country (neither of them within a considerable distance), it became the general resort of the youth of the Province in which it was situated. For several years in succession, its students amounted to nearly fifty,–a number which, relatively to the circumstances of the country, was very considerable.