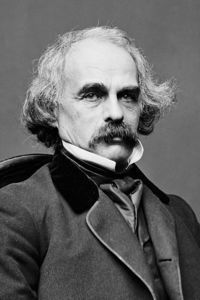 Nathaniel Hawthorne was an American novelist and short story writer. Much of Hawthorne’s writing centres around New England, many works featuring moral allegories with a Puritan inspiration. His fiction works are considered part of the Romantic movement and, more specifically, dark romanticism. His themes often centre on the inherent evil and sin of humanity, and his works often have moral messages and deep psychological complexity.

A Wonder-Book for Boys and Girls is a classic retelling for children of some of the most famous stories from Greek mythology. In this collection you wil...read more »

While he had written many short stories before, “Fanshawe” was Nathaniel Hawthorne’s first attempt at writing a novel. The novel is based on his experie...read more »

Hawthorne wrote these stories for children based on Greek myth and legend. They are incomparable retellings of themes which the Greek dramatists used in...read more »

Set on a communal farm called Blithedale, “The Blithedale Romance” is the story of four inhabitants of the commune: Hollingsworth, a misogynist philanth...read more »

The sins of one generation are visited upon another in a haunted New England mansion until the arrival of a young woman from the country breathes new ai...read more »

The fragility-and the durability-of human life and art dominate this story of American expatriates in Italy in the mid-nineteenth century. Befriended by...read more »

It is 1642 in the Puritan town of Boston. Hester Prynne has been found guilty of adultery and has born an illegitimate child. In lieu of being put to de...read more »