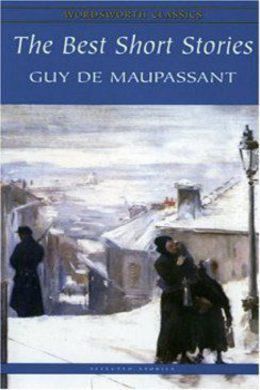 “I entered literary life as a meteor, and I shall leave it like a thunderbolt.” These words of Maupassant to Jose Maria de Heredia on the occasion of a memorable meeting are, in spite of their morbid solemnity, not an inexact summing up of the brief career during which, for ten years, the writer, by turns undaunted and sorrowful, with the fertility of a master hand produced poetry, novels, romances and travels, only to sink prematurely into the abyss of madness and death…..This book contains all thirteen volumes of his original short stories.

For several days in succession fragments of a defeated army had passed through the town. They were mere disorganized bands, not disciplined forces. The men wore long, dirty beards and tattered uniforms; they advanced in listless fashion, without a flag, without a leader. All seemed exhausted, worn out, incapable of thought or resolve, marching onward merely by force of habit, and dropping to the ground with fatigue the moment they halted. One saw, in particular, many enlisted men, peaceful citizens, men who lived quietly on their income, bending beneath the weight of their rifles; and little active volunteers, easily frightened but full of enthusiasm, as eager to attack as they were ready to take to flight; and amid these, a sprinkling of red-breeched soldiers, the pitiful remnant of a division cut down in a great battle; somber artillerymen, side by side with nondescript foot-soldiers; and, here and there, the gleaming helmet of a heavy-footed dragoon who had difficulty in keeping up with the quicker pace of the soldiers of the line. Legions of irregulars with high-sounding names “Avengers of Defeat,” “Citizens of the Tomb,” “Brethren in Death”–passed in their turn, looking like banditti. Their leaders, former drapers or grain merchants, or tallow or soap chandlers–warriors by force of circumstances, officers by reason of their mustachios or their money–covered with weapons, flannel and gold lace, spoke in an impressive manner, discussed plans of campaign, and behaved as though they alone bore the fortunes of dying France on their braggart shoulders; though, in truth, they frequently were afraid of their own men–scoundrels often brave beyond measure, but pillagers and debauchees.

Rumor had it that the Prussians were about to enter Rouen.

The members of the National Guard, who for the past two months had been reconnoitering with the utmost caution in the neighboring woods, occasionally shooting their own sentinels, and making ready for fight whenever a rabbit rustled in the undergrowth, had now returned to their homes. Their arms, their uniforms, all the death-dealing paraphernalia with which they had terrified all the milestones along the highroad for eight miles round, had suddenly and marvellously disappeared.

The last of the French soldiers had just crossed the Seine on their way to Pont-Audemer, through Saint-Sever and Bourg-Achard, and in their rear the vanquished general, powerless to do aught with the forlorn remnants of his army, himself dismayed at the final overthrow of a nation accustomed to victory and disastrously beaten despite its legendary bravery, walked between two orderlies.

Then a profound calm, a shuddering, silent dread, settled on the city. Many a round-paunched citizen, emasculated by years devoted to business, anxiously awaited the conquerors, trembling lest his roasting-jacks or kitchen knives should be looked upon as weapons.

Life seemed to have stopped short; the shops were shut, the streets deserted. Now and then an inhabitant, awed by the silence, glided swiftly by in the shadow of the walls. The anguish of suspense made men even desire the arrival of the enemy.

In the afternoon of the day following the departure of the French troops, a number of uhlans, coming no one knew whence, passed rapidly through the town. A little later on, a black mass descended St. Catherine’s Hill, while two other invading bodies appeared respectively on the Darnetal and the Boisguillaume roads. The advance guards of the three corps arrived at precisely the same moment at the Square of the Hotel de Ville, and the German army poured through all the adjacent streets, its battalions making the pavement ring with their firm, measured tread.

Orders shouted in an unknown, guttural tongue rose to the windows of the seemingly dead, deserted houses; while behind the fast-closed shutters eager eyes peered forth at the victors-masters now of the city, its fortunes, and its lives, by “right of war.” The inhabitants, in their darkened rooms, were possessed by that terror which follows in the wake of cataclysms, of deadly upheavals of the earth, against which all human skill and strength are vain. For the same thing happens whenever the established order of things is upset, when security no longer exists, when all those rights usually protected by the law of man or of Nature are at the mercy of unreasoning, savage force. The earthquake crushing a whole nation under falling roofs; the flood let loose, and engulfing in its swirling depths the corpses of drowned peasants, along with dead oxen and beams torn from shattered houses…