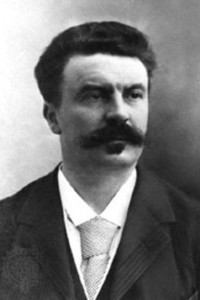 Henri René Albert Guy de Maupassant was a popular 19th-century French writer and considered one of the fathers of the modern short story. A protégé of Flaubert, Maupassant’s stories are characterized by their economy of style and efficient, effortless dénouement. Many of the stories are set during the Franco-Prussian War of the 1870s and several describe the futility of war and the innocent civilians who, caught in the conflict, emerge changed. He also wrote six short novels. (source: Wikipedia)

Bel-Ami is the story of a ruthlessly ambitious young man (Georges Duroy, christened “Bel-Ami” by his female admirers) making it to the top in fin-de-sih...read more »

“I entered literary life as a meteor, and I shall leave it like a thunderbolt.” These words of Maupassant to Jose Maria de Heredia on the occasion of a ...read more »

Henry James’s admiration for “this masterly little novel” has been echoed throughout the twentieth century by readers of Pierre et Jean. It marked a tur...read more »