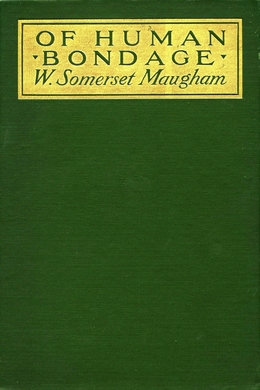 A potent expression of the power of sexual obsession and of modern man’s yearning for freedom. This classic tells the story of Philip Carey, a sensitive boy born with a clubfoot who is orphaned and raised by a religious aunt and uncle. Philip yearns for adventure, and at eighteen leaves home, eventually pursuing a career as an artist in Paris. When he returns to London to study medicine, he meets the androgynous but alluring Mildred and begins a doomed love affair that will change the course of his life. There is no more powerful story of sexual infatuation, of human longing for connection and freedom. ‘Here is a novel of the utmost importance,’ wrote Theodore Dreiser on publication. ‘It is a beacon of light by which the wanderer may be guided. One feels as though one were sitting before a splendid Shiraz of priceless texture and intricate weave, admiring, feeling, responding sensually to its colors and tones.’

The day broke gray and dull. The clouds hung heavily, and there was a rawness in the air that suggested snow. A woman servant came into a room in which a child was sleeping and drew the curtains. She glanced mechanically at the house opposite, a stucco house with a portico, and went to the child’s bed.

She pulled down the bed-clothes, took him in her arms, and carried him downstairs. He was only half awake.

“Your mother wants you,” she said.

She opened the door of a room on the floor below and took the child over to a bed in which a woman was lying. It was his mother. She stretched out her arms, and the child nestled by her side. He did not ask why he had been awakened. The woman kissed his eyes, and with thin, small hands felt the warm body through his white flannel nightgown. She pressed him closer to herself.

“Are you sleepy, darling?” she said.

Her voice was so weak that it seemed to come already from a great distance. The child did not answer, but smiled comfortably. He was very happy in the large, warm bed, with those soft arms about him. He tried to make himself smaller still as he cuddled up against his mother, and he kissed her sleepily. In a moment he closed his eyes and was fast asleep. The doctor came forwards and stood by the bed-side.

The doctor, without answering, looked at her gravely. Knowing she would not be allowed to keep the child much longer, the woman kissed him again; and she passed her hand down his body till she came to his feet; she held the right foot in her hand and felt the five small toes; and then slowly passed her hand over the left one. She gave a sob.

She shook her head, unable to speak, and the tears rolled down her cheeks. The doctor bent down.

She was too weak to resist his wish, and she gave the child up. The doctor handed him back to his nurse.

“You’d better put him back in his own bed.”

“What will happen to him, poor child?”

The monthly nurse tried to quiet her, and presently, from exhaustion, the crying ceased. The doctor walked to a table on the other side of the room, upon which, under a towel, lay the body of a still-born child. He lifted the towel and looked. He was hidden from the bed by a screen, but the woman guessed what he was doing.

“Was it a girl or a boy?” she whispered to the nurse.

The woman did not answer. In a moment the child’s nurse came back. She approached the bed.

“Master Philip never woke up,” she said. There was a pause. Then the doctor felt his patient’s pulse once more.

“I don’t think there’s anything I can do just now,” he said. “I’ll call again after breakfast.”

They walked downstairs in silence. In the hall the doctor stopped.

“D’you know at what time he’ll be here?”

“What about the little boy? I should think he’d be better out of the way.”

“She’s his godmother, sir. D’you think Mrs. Carey will get over it, sir?”

The doctor shook his head.

It was a week later. Philip was sitting on the floor in the drawing-room at Miss Watkin’s house in Onslow gardens. He was an only child and used to amusing himself. The room was filled with massive furniture, and on each of the sofas were three big cushions. There was a cushion too in each arm-chair. All these he had taken and, with the help of the gilt rout chairs, light and easy to move, had made an elaborate cave in which he could hide himself from the Red Indians who were lurking behind the curtains. He put his ear to the floor and listened to the herd of buffaloes that raced across the prairie. Presently, hearing the door open, he held his breath so that he might not be discovered; but a violent hand pulled away a chair and the cushions fell down.

“You naughty boy, Miss Watkin WILL be cross with you.”

The nurse bent down and kissed him, then began to shake out the cushions, and put them back in their places.

It was in eighteen-eighty-five, and she wore a bustle. Her gown was of black velvet, with tight sleeves and sloping shoulders, and the skirt had three large flounces. She wore a black bonnet with velvet strings. She hesitated. The question she had expected did not come, and so she could not give the answer she had prepared.

“Aren’t you going to ask how your mamma is?” she said at length.