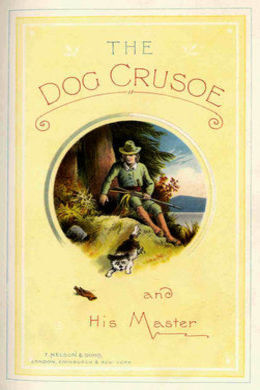 The Dog Crusoe and His Master

A Story of Adventure in the Western Prairies

Who doesn’t like a story that involves a great dog and his young master and friends? In this book you will share their action packed journey and adventures as they wander through the Western prairies with a mission to bring peace between the white population and the assorted Indian tribes. They face many perils and become heroes many times over.

The dog Crusoe was once a pup. Now do not, courteous reader, toss your head contemptuously, and exclaim, “Of course he was; I could have told you that.” You know very well that you have often seen a man above six feet high, broad and powerful as a lion, with a bronzed shaggy visage and the stern glance of an eagle, of whom you have said, or thought, or heard others say, “It is scarcely possible to believe that such a man was once a squalling baby.” If you had seen our hero in all the strength and majesty of full–grown doghood, you would have experienced a vague sort of surprise had we told you—as we now repeat—that the dog Crusoe was once a pup—a soft, round, sprawling, squeaking pup, as fat as a tallow candle, and as blind as a bat.

But we draw particular attention to the fact of Crusoe’s having once been a pup, because in connection with the days of his puppyhood there hangs a tale.

This peculiar dog may thus be said to have had two tails—one in connection with his body, the other with his career. This tale, though short, is very harrowing, and as it is intimately connected with Crusoe’s subsequent history we will relate it here. But before doing so we must beg our reader to accompany us beyond the civilized portions of the United States of America—beyond the frontier settlements of the “far west,” into those wild prairies which are watered by the great Missouri River—the Father of Waters—and his numerous tributaries.

Here dwell the Pawnees, the Sioux, the Delawarers, the Crows, the Blackfeet, and many other tribes of Red Indians, who are gradually retreating step by step towards the Rocky Mountains as the advancing white man cuts down their trees and ploughs up their prairies. Here, too, dwell the wild horse and the wild ass, the deer, the buffalo, and the badger; all, men and brutes alike, wild as the power of untamed and ungovernable passion can make them, and free as the wind that sweeps over their mighty plains.

There is a romantic and exquisitely beautiful spot on the banks of one of the tributaries above referred to—long stretch of mingled woodland and meadow, with a magnificent lake lying like a gem in its green bosom—which goes by the name of the Mustang Valley. This remote vale, even at the present day, is but thinly peopled by white men, and is still a frontier settlement round which the wolf and the bear prowl curiously, and from which the startled deer bounds terrified away. At the period of which we write the valley had just been taken possession of by several families of squatters, who, tired of the turmoil and the squabbles of the then frontier settlements, had pushed boldly into the far west to seek a new home for themselves, where they could have “elbow room,” regardless alike of the dangers they might encounter in unknown lands and of the Redskins who dwelt there.

The squatters were well armed with axes, rifles, and ammunition. Most of the women were used to dangers and alarms, and placed implicit reliance in the power of their fathers, husbands, and brothers to protect them; and well they might, for a bolder set of stalwart men than these backwoodsmen never trod the wilderness. Each had been trained to the use of the rifle and the axe from infancy, and many of them had spent so much of their lives in the woods that they were more than a match for the Indian in his own peculiar pursuits of hunting and war. When the squatters first issued from the woods bordering the valley, an immense herd of wild horses or mustangs were browsing on the plain. These no sooner beheld the cavalcade of white men than, uttering a wild neigh, they tossed their flowing manes in the breeze and dashed away like a whirlwind. This incident procured the valley its name.

The new–comers gave one satisfied glance at their future home, and then set to work to erect log huts forthwith. Soon the axe was heard ringing through the forests, and tree after tree fell to the ground, while the occasional sharp ring of a rifle told that the hunters were catering successfully for the camp. In course of time the Mustang Valley began to assume the aspect of a thriving settlement, with cottages and waving fields clustered together in the midst of it.

Of course the savages soon found it out and paid it occasional visits. These dark–skinned tenants of the woods brought furs of wild animals with them, which they exchanged with the white men for knives, and beads, and baubles and trinkets of brass and tin. But they hated the “Pale–faces” with bitter hatred, because their encroachments had at this time materially curtailed the extent of their hunting–grounds, and nothing but the numbers and known courage of the squatters prevented these savages from butchering and scalping them all.