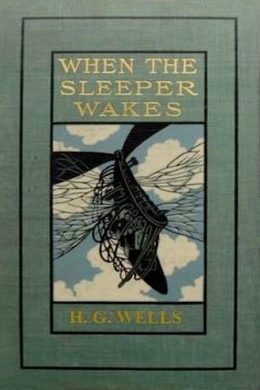 When the Sleeper Wakes

The Sleeper is just an ordinary man, no one special, just someone going about his everyday business. Until one day he awakes, and finds that the world around him has changed. No longer a nobody, he has been catapulted into the unenviable position of a pawn in a dangerous conspiracy where the stakes are high and the players shockingly intelligent. For this is not the world that the Sleeper knows, but a new and terrifying mutation.

A decade after this novel was first published, Wells fully revised and published it as The Sleeper Awakes.

One afternoon, at low water, Mr. Isbister, a young artist lodging at Boscastle, walked from that place to the picturesque cove of Pentargen, desiring to examine the caves there. Halfway down the precipitous path to the Pentargen beach he came suddenly upon a man sitting in an attitude of profound distress beneath a projecting mass of rock. The hands of this man hung limply over his knees, his eyes were red and staring before him, and his face was wet with tears.

He glanced round at Isbister’s footfall. Both men were disconcerted, Isbister the more so, and, to override the awkwardness of his involuntary pause, he remarked, with an air of mature conviction, that the weather was hot for the time of year.

“Very,” answered the stranger shortly, hesitated a second, and added in a colourless tone, “I can’t sleep.”

Isbister stopped abruptly. “No?” was all he said, but his bearing conveyed his helpful impulse.

“It may sound incredible,” said the stranger, turning weary eyes to Isbister’s face and emphasizing his words with a languid hand, “but I have had no sleep–no sleep at all for six nights.”

“Yes. Bad advice for the most part. Drugs. My nervous system…. They are all very well for the run of people. It’s hard to explain. I dare not take… sufficiently powerful drugs.”

“That makes it difficult,” said Isbister.

He stood helplessly in the narrow path, perplexed what to do. Clearly the man wanted to talk. An idea natural enough under the circumstances, prompted him to keep the conversation going. “I’ve never suffered from sleeplessness myself,” he said in a tone of commonplace gossip, “but in those cases I have known, people have usually found something–”

“I dare make no experiments.”

He spoke wearily. He gave a gesture of rejection, and for a space both men were silent.

“Exercise?” suggested Isbister diffidently, with a glance from his interlocutor’s face of wretchedness to the touring costume he wore.

“That is what I have tried. Unwisely perhaps. I have followed the coast, day after day–from New Quay. It has only added muscular fatigue to the mental. The cause of this unrest was overwork–trouble. There was something–”

He stopped as if from sheer fatigue. He rubbed his forehead with a lean hand. He resumed speech like one who talks to himself.

“I am a lone wolf, a solitary man, wandering through a world in which I have no part. I am wifeless–childless–who is it speaks of the childless as the dead twigs on the tree of life? I am wifeless, I childless–I could find no duty to do. No desire even in my heart. One thing at last I set myself to do.

“I said, I will do this, and to do it, to overcome the inertia of this dull body, I resorted to drugs. Great God, I’ve had enough of drugs! I don’t know if you feel the heavy inconvenience of the body, its exasperating demand of time from the mind–time–life! Live! We only live in patches. We have to eat, and then comes the dull digestive complacencies–or irritations. We have to take the air or else our thoughts grow sluggish, stupid, run into gulfs and blind alleys. A thousand distractions arise from within and without, and then comes drowsiness and sleep. Men seem to live for sleep. How little of a man’s day is his own–even at the best! And then come those false friends, those Thug helpers, the alkaloids that stifle natural fatigue and kill rest–black coffee, cocaine–”

“I did my work,” said the sleepless man with a querulous intonation.

“And this is the price?”

For a little while the two remained without speaking.

“You cannot imagine the craving for rest that I feel–a hunger and thirst. For six long days, since my work was done, my mind has been a whirlpool, swift, unprogressive and incessant, a torrent of thoughts leading nowhere, spinning round swift and steady–”

He paused. “Towards the gulf.”

“You must sleep,” said Isbister decisively, and with an air of a remedy discovered. “Certainly you must sleep.”

“My mind is perfectly lucid. It was never clearer. But I know I am drawing towards the vortex. Presently–”

“You have seen things go down an eddy? Out of the light of the day, out of this sweet world of sanity–down–”

The man threw out a hand towards him, and his eyes were wild, and his voice suddenly high. “I shall kill myself. If in no other way–at the foot of yonder dark precipice there, where the waves are green, and the white surge lifts and falls, and that little thread of water trembles down. There at any rate is … sleep.”

“That’s unreasonable,” said Isbister, startled at the man’s hysterical gust of emotion. “Drugs are better than that.”

“There at any rate is sleep,” repeated the stranger, not heeding him.

Isbister looked at him and wondered transitorily if some complex Providence had indeed brought them together that afternoon. “It’s not a cert, you know,” he remarked.