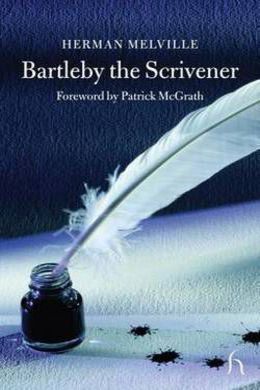 A Story of Wall-Street

Bartleby the Scrivener is the story of a quiet, hard working legal copyist who works in an office in the Wall Street area of New York City. One day Bartleby declines the assignment his employer gives him with the inscrutable “I would prefer not.” The utterance of this remark sets off a confounding set of actions and behavior, making the unsettling character of Bartleby one of Melville’s most enigmatic and unforgettable creations.

I am a rather elderly man. The nature of my avocations for the last thirty years has brought me into more than ordinary contact with what would seem an interesting and somewhat singular set of men, of whom as yet nothing that I know of has ever been written:–I mean the law-copyists or scriveners. I have known very many of them, professionally and privately, and if I pleased, could relate divers histories, at which good-natured gentlemen might smile, and sentimental souls might weep. But I waive the biographies of all other scriveners for a few passages in the life of Bartleby, who was a scrivener of the strangest I ever saw or heard of. While of other law-copyists I might write the complete life, of Bartleby nothing of that sort can be done. I believe that no materials exist for a full and satisfactory biography of this man. It is an irreparable loss to literature. Bartleby was one of those beings of whom nothing is ascertainable, except from the original sources, and in his case those are very small. What my own astonished eyes saw of Bartleby, that is all I know of him, except, indeed, one vague report which will appear in the sequel.

Ere introducing the scrivener, as he first appeared to me, it is fit I make some mention of myself, my employees, my business, my chambers, and general surroundings; because some such description is indispensable to an adequate understanding of the chief character about to be presented.

Imprimis: I am a man who, from his youth upwards, has been filled with a profound conviction that the easiest way of life is the best. Hence, though I belong to a profession proverbially energetic and nervous, even to turbulence, at times, yet nothing of that sort have I ever suffered to invade my peace. I am one of those unambitious lawyers who never addresses a jury, or in any way draws down public applause; but in the cool tranquility of a snug retreat, do a snug business among rich men’s bonds and mortgages and title-deeds. All who know me, consider me an eminently safe man. The late John Jacob Astor, a personage little given to poetic enthusiasm, had no hesitation in pronouncing my first grand point to be prudence; my next, method. I do not speak it in vanity, but simply record the fact, that I was not unemployed in my profession by the late John Jacob Astor; a name which, I admit, I love to repeat, for it hath a rounded and orbicular sound to it, and rings like unto bullion. I will freely add, that I was not insensible to the late John Jacob Astor’s good opinion.

Some time prior to the period at which this little history begins, my avocations had been largely increased. The good old office, now extinct in the State of New York, of a Master in Chancery, had been conferred upon me. It was not a very arduous office, but very pleasantly remunerative. I seldom lose my temper; much more seldom indulge in dangerous indignation at wrongs and outrages; but I must be permitted to be rash here and declare, that I consider the sudden and violent abrogation of the office of Master in Chancery, by the new Constitution, as a–premature act; inasmuch as I had counted upon a life-lease of the profits, whereas I only received those of a few short years. But this is by the way.

My chambers were up stairs at No.–Wall-street. At one end they looked upon the white wall of the interior of a spacious sky-light shaft, penetrating the building from top to bottom. This view might have been considered rather tame than otherwise, deficient in what landscape painters call “life.” But if so, the view from the other end of my chambers offered, at least, a contrast, if nothing more. In that direction my windows commanded an unobstructed view of a lofty brick wall, black by age and everlasting shade; which wall required no spy-glass to bring out its lurking beauties, but for the benefit of all near-sighted spectators, was pushed up to within ten feet of my window panes. Owing to the great height of the surrounding buildings, and my chambers being on the second floor, the interval between this wall and mine not a little resembled a huge square cistern.

At the period just preceding the advent of Bartleby, I had two persons as copyists in my employment, and a promising lad as an office-boy. First, Turkey; second, Nippers; third, Ginger Nut. These may seem names, the like of which are not usually found in the Directory. In truth they were nicknames, mutually conferred upon each other by my three clerks, and were deemed expressive of their respective persons or characters. Turkey was a short, pursy Englishman of about my own age, that is, somewhere not far from sixty. In the morning, one might say, his face was of a fine florid hue, but after twelve o’clock, meridian–his dinner hour–it blazed like a grate full of Christmas coals…